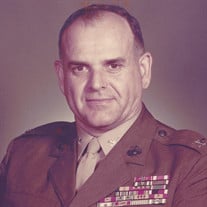 Hayes: Colonel Alexander S. Ruggiero, USMC, (Retired), passed away December 13, 2017, at his home. He enlisted in the Marines in 1946 and served until 1978. As a young man, he joined the New York Guard, Navy (V-12A) program with a dream to become a Marine pilot. In the summer of 1946, WWII ended, the need for flight training was reduced, so he was discharged. Two months later he enlisted in the USMC and was sent to Paris Island boot camp. After boot camp he was assigned to MCAS Cherry Point and became an aerial navigator with the Transportation Squadron. He was assigned to Basic School, commissioned as a 2nd LT with the 2nd MarDiv, FMFLANT Camp LeJeune, Artillery Regiment 10th Marine, Battery A/1/10. In 1950 he was ordered to Camp Pendleton, CA, then fought at Inchon, Korea and later commanded an artillery battalion in Vietnam. Of all his career assignments, his fondest memories are associated with his assignment to NATO in 1967. He was able to take his family with him overseas to Naples, Italy. His father was born in Italy, fought in WWI, and then immigrated to Niagara Falls, NY in 1920, where many relatives had settled. During Col. Ruggiero’s second year at NATO, he was granted extended leave and toured Italy with his family and father, gaining firsthand knowledge of his heritage. During his career he was the recipient of twenty medals, most notably the Bronze Star (twice), Vietnamese Gallantry Cross with Gold Star, Purple Heart and Legion of Merit. He always gave his utmost to each of his assignments, “to the best of his ability”, and was loved and respected by his men. Col Ruggiero introduced the NJROTC Unit at Gloucester High School in 1980. Today 37 years later the unit is doing well, led by Lt. Cdr. Justin Whitt, USN, Ret., who was a young sailor Col. Ruggiero recommended for a commission. His advice to all: set realistic goals to achieve, and above all, “Do Not Hibernate.” Col Ruggiero was a member of (MOAA) Military Officers Association of American, Marine Corps League (Det. 1317), VFW, American Legion, Williamsburg Area Marines (WMA), VIPMJOAA, and a member of Abingdon Episcopal Church. Col Ruggiero was a respectful man of excellent character, sterling personal qualities, with a joyous love of life and deeply devoted to his family. He will be missed for his love and kindness, always. He was preceded in death by his parents; his loving wife of 68 years, Ruth J. Ruggiero; and eldest son, Douglas A. Ruggiero and daughter in law, Gail Ruggiero. He is survived by his sons, Robert W. Ruggiero (Sally) and George “Jerry” E. Ruggiero (Barbara); grandsons, Alexander Ruggiero, Marcus Richardson and Bradley Ruggiero and brother, Frank Ruggiero (Kathleen). Funeral services, to be officiated by Reverend Sven vanBaars, will be 11 a.m. Monday, December 18, 2017, at Abingdon Episcopal Church. Interment will full military honors will follow in the church cemetery. Arrangements are under the direction of Hogg Funeral Home and Crematory, Gloucester Point. Please visit www.hoggfh.com to share condolences and memories with the family.

Hayes: Colonel Alexander S. Ruggiero, USMC, (Retired), passed away December 13, 2017, at his home. He enlisted in the Marines in 1946 and served until 1978. As a young man, he joined the New York Guard, Navy (V-12A) program with a dream to become... View Obituary & Service Information

The family of Colonel Alexander S. Ruggiero USMC (Ret.) created this Life Tributes page to make it easy to share your memories.