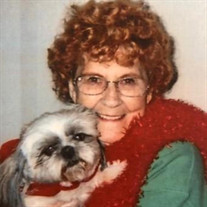 Alice Margaret MacFarland Deal, of Hayes, age 92, was called to her heavenly home on Thursday, July 9, 2020. She died of natural causes from progressive congestive heart failure. Born and raised in Philadelphia, Pennsylvania, on February 28, 1928, young Alice ventured down to Norfolk, Virginia, with a friend. There she met a handsome young veteran of World War II, Ervin Elwood Deal. It was love at first sight for both of them. They married on October 2nd, 1948, and remained married for 57 years until his death on July 11, 2007. To summarize, Alice’s priorities in life - was her love for God, for her family, and her church. She and her husband Ervin raised two children together, Jimmy (James E. Deal) and Leann (Dr. Leann Ruth Deal Moore). They moved from Portsmouth, VA, to Gloucester in 1963. Alice was a wonderful homemaker and later became a school bus driver for Gloucester County Public Schools, where she worked for 25 years. She was an active member of Gloucester Point Baptist Church for 57 years, singing in the choir, serving as choir director for 25 years, teaching Sunday school and a member of the Women’s Missionary Union, and many other mission projects. In more recent years, she was a member of Senior Morning Out and still sang in the choir whenever she was able. Alice made friends everywhere she went with her warmth, joy, kindness, and undeniable sense of fashion. She will be missed by so many of us whose lives were made richer, better, and happier for knowing her. She was preceded in death by her beloved husband, Ervin E. Deal, and her son, James E. Deal. Survivors include her devoted daughter, Dr. Leann Ruth Deal Moore, and husband, Dr. Staley C. Moore, five grandchildren, Christina M. Moore, Nancy Allison Moore of New Bern, North Carolina; Teresa E. Deal, Ervin E. Deal, II, and Charles E. Deal of Newport News, Virginia, one great-granddaughter, Coral A.E. Deal Baines of Suffolk, Virginia, one sister Ruth A. MacFarland of Brigantine, New Jersey as well as many additional family members, friends and acquaintances whose life she brightened with her smile and warmth. A graveside service officiated by Reverend Ray “Bud” Goude, Jr., will be held at 10:00 a.m. on Saturday, July 18th at Rosewell Memorial Garden Cemetery of Hayes, VA. In Alice’s memory, memorial contributions may be made to Gloucester Point Baptist Church, Building Funds, or Missions, P.O. Box 305, Gloucester Point, VA, 23062. Due to the COVID-19 PANDEMIC, social distancing requirements will be followed, and masks are required—services under the direction of Hogg Funeral Home.

The family of Alice Margaret Deal created this Life Tributes page to make it easy to share your memories.

Send flowers to the Deal family.