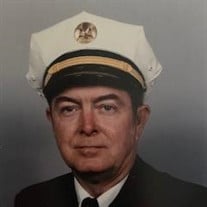 Benjamin Franklin Ezzell, 75, of Gloucester Point, died peacefully at home surrounded by family Thursday, February 21, 2019. Ben was born December 23, 1943, in Warsaw, North Carolina to the late James and Melva Ezzell, where he helped them tend to their farm since he was old enough to walk. It was here that Ben developed an unrelentingly strong work ethic. At the age of 21, he left his farm and family in pursuit of career opportunities. In 1964, Ben found himself in the City of Newport News, VA where a family member recommended the Fire Department. After an application and a chat with the chief, his lifelong career began as a firefighter for the City of Newport News. Ben worked his way up the company ladder, accomplishing many roles, such as Lieutenant and Captain. It was during this time that he met the love of his life, sharing four children and later welcoming six grandchildren. Ben not only had a strong appreciation for the fire service, but he also had a passion for classic cars. On his days off from the department, you could find him “tinkering” in the garage with his many toys. In December of 2000, after 36 years of dedicated service, he retired as a Captain. Ben spent his retirement enjoying his family and restoring old classic cars. He leaves behind a legacy of a strong leader, good works and serves as an extraordinary role model for future generations. A brother Bobby Ezzell preceded him in death. He leaves behind to cherish his memories, wife of 28 years, Patricia Ezzell, children, Brenda Fisher and husband Randy of Hayes, Jennifer Cannon and husband Craig of Hayes, James Ezzell of Reykjavik, Iceland, Bonnie Appleby and husband Luke of Poquoson; grandchildren, Ryan Fisher, Jacob Fisher, Tessajeanae Houdek, Benjamin Cannon, Kayla Appleby, Taylor Hollingsworth, and an Uncle, Roy Ezzell of Warsaw, NC. A service of remembrance, with fire department honors, will be held 12:00 p.m., Friday, March 1, 2019, conducted by the Reverend Ray Goude, Jr., at Gloucester Point Baptist Church, 7741 Terrapin Cove Rd, Gloucester Point. The family will receive friends from 11:00 a.m. until 12:00 p.m. before the service. Inurnment will be private. In Captain Ezzell’s memory, memorial contributions may be made to The Safe House NNFD, 3303 Jefferson Avenue, Newport News, VA 23607.

The family of Benjamin F. Ezzell created this Life Tributes page to make it easy to share your memories.

Send flowers to the Ezzell family.