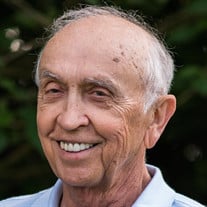 Gloucester Point: Bennie H. Smith passed away on May 12, 2017 surrounded by his family at Sentara Heart Hospital in Norfolk, VA. Bennie was born March 31, 1934 in La Grange, NC, to the late William Heber Smith and Lillian Ellis Smith. Bennie was a much beloved husband, father and grandfather. He is survived by his wife of almost sixty one years, Clarice Hall Smith, three children, Jeff and his wife, Melinda; Marsha and her husband, Harry; and Cheslie and his wife, Penny; four grandchildren, Hunter, Hilary, Peyton and Benjamin; two siblings, William H. "Pete" Smith Jr. and Frances Smith Rouse; along with a number of nieces and nephews. In addition to his parents, Bennie was preceded in death by ten siblings, Lenard, Jessie, Walter, Garland, Alphas, Preston, Mary Lucille, Pauline Lassiter, Evelyn McMillan and Beulah Roberts. Bennie graduated from New Hope High School in 1953 and moved to Newport News a year later. He immediately began working at Newport News Shipbuilding and held several jobs before taking a position in the Material Support and Inventory Control Department. Within that department he continued to be promoted and retired as a General Foreman and Master Shipbuilder after 44 years. Bennie was a lifetime member of the Virginia Masonic Bremond Lodge No. 241 A.F.& A.M. He enjoyed spending time with family and friends, going to the gym, hunting and working in his yard. He brought joy to all he encountered and enjoyed making others laugh. He never met a stranger and was always willing to lend a helping hand. A graveside service of remembrance and interment will be held Tuesday, May 16, 2017 at 11 a.m. at Rosewell Memorial Garden Cemetery, State Route 636 Providence Road, Hayes, VA 23072. The family will have a fellowship and luncheon immediately following the graveside service at Union Baptist Church, Edward’s Hall, 9254 Guinea Road, Hayes, VA 23072. In memory of Bennie the family desires contributions be given to GUEST (Gloucester United Emergency Shelter Team), 6536 Moose Drive, Gloucester, VA 23061, or the Bremond Lodge No. 241 A.F.& A.M., 12735 Warwick Boulevard, Newport News, VA 23606-1806. Arrangements under the direction of Hogg Funeral Home and Crematory, Gloucester Point. Please visit www.hoggfh.com to share condolences and memories with the family.

The family of Bennie H. Smith created this Life Tributes page to make it easy to share your memories.

Send flowers to the Smith family.