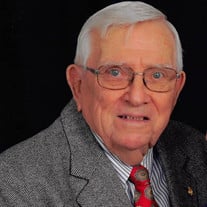 Gloucester Point: Bernard Junior “Jack” Poland, 92, passed away at home on Tuesday, November 15. Jack was born on June 16, 1924, to the late John B. and Mae Ashe Poland in his father’s hometown of Shelby, Ohio; however, he spent most of his life in his mother’s hometown at Gloucester Point. Jack graduated from Achilles High School, and while on a baseball scholarship at Hampden-Sydney College, he was drafted into the Army and served in WWII for two years. After returning home, Jack, with his brothers Norman and Dickie, joined their parents in the ownership and operation of Poland’s Supermarket at Gloucester Point. Jack was in his element working in the store; he could talk with anyone, and deeply valued and benefited from the daily interaction with customers and friends. Jack loved playing baseball and golf, and followed sports on a daily basis. He also enjoyed fishing, and after retirement, he and Mary were so grateful for all of the trips they got to take in their motor home with their dear Colonial Virginian friends. Most of all, Jack loved his family. He is survived by his wife, Mary Malay. Jack and Mary celebrated their 70th wedding anniversary on July 30, 2016. Jack is also survived by his children Marsha McGinnis, Donald Poland (Jack), and Peggy Lewis (David), and his brother, Richard “Dickie” Poland. He was adored by his grandchildren, Jennifer (John) and Kim (William), as well as his great-grandson, Carwyn. The family would like to thank the incredible team of women who faithfully and lovingly cared for Jack, including Connie Reinke, Jonna Watlet, Angie Jenkins, Cookie Edwards, Leatha McMillan, Cheryl Winston, Becky Riffe, and Ethel Schoenborn. The family will receive friends in the sanctuary of Bethany United Methodist Church, Gloucester Point on Saturday, November 19 from 2:00 until 3:00 PM followed by a service of remembrance at 3:00 PM officiated by Reverend Deborah T. Marion. Interment will follow in Gloucester Point Cemetery. Given Jack’s life work in the grocery business, the family requests that memorial contributions be made to the Virginia Peninsula Food Bank, 2401 Aluminum Avenue, Hampton, VA 23661 or www.hrfoodbank.org. Please notate your contribution is in memory of Jack Poland. Funeral arrangements made by Hogg Funeral Home and Crematory, Gloucester Point. Family and friends may share condolences and memories at www.hoggfh.com

The family of Bernard "Jack" Poland created this Life Tributes page to make it easy to share your memories.

Send flowers to the Poland family.