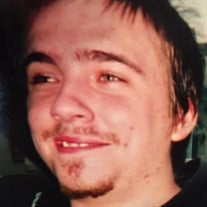 Billy Allen Shifflett, 29 years old of Gloucester, Virginia passed away suddenly on February 1, 2018. Billy was born on October 21, 1988 in Baltimore, Maryland. At age 6 he moved with his family to Gloucester, Virginia. He attended Gloucester High School. Billy showed many positive attributes during his short time here on earth. He was kind, generous, helpful and smart, in that, he was respectful to the elderly, could placate the young. He was always eager to please anyone who was in need, without a single complaint. He was very knowledgeable in many areas like world politics, history, astronomy and especially the Bible. He was our family’s “go to guy” for any questions needing an answer. He had a remarkable way of making a joke even funnier. Billy’s favorite things to do were camping, video games, watching the Philadelphia Eagles (his favorite team), spending time with his family and his beloved pit bull Axel. He enjoyed holidays and vacations in Ocean City, Maryland when he could share and create new memories and traditions. Billy will hold a special place in all of our heart’s forever. He was preceded in death by his maternal grandparents Lloyd and Carol Meadows and paternal grandmother Nellie Shifflett. He is survived by parents, Billy and Diana Shifflett, brother Joshua Shifflett, sister Harley Shifflett (Luke Peacock) and grandfather Ruben (Billy) Shifflett all from Gloucester, Virginia. Also survived by many aunts and uncles to include Ricky and Jenny Meadows (cousin Mathew) of Sykesville, Maryland, Lisa and Paul Albritton (cousin Wayne) of Sykesville, Maryland, Dawn and Mark McCoy (cousins Tyler and Dalton) of Martinsburg, West Virginia, Robert and Rebecca Shifflett (cousin Robert and Latisha) of Salem, West Virginia, Tina and Timothy Welsh (cousins Timothy, Jenna, Samantha and Savannah) from Gloucester, Virginia. Also survived by many other family and friends that were blessed to have known Billy. The family will receive family and friends on Tuesday February 6, 2018 from 6 to 7:30pm at Hogg Funeral home at 3098 George Washington Memorial Highway Hayes, Virginia 23072. Funeral Services to be at the same location on Wednesday February 7, 2018 at 2 p.m. Burial immediately after at Bellamy Cemetery.

Billy Allen Shifflett, 29 years old of Gloucester, Virginia passed away suddenly on February 1, 2018. Billy was born on October 21, 1988 in Baltimore, Maryland. At age 6 he moved with his family to Gloucester, Virginia. He attended Gloucester... View Obituary & Service Information

The family of Billy Allen Shifflett created this Life Tributes page to make it easy to share your memories.

Send flowers to the Shifflett family.