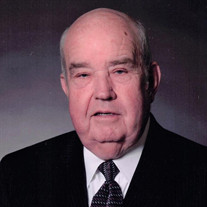 Carlton Lee West age 84, a lifelong resident of Gloucester, traveled to his Heavenly Home on January 31, 2021. Carlton, in more than 40 years as owner/operator of C. L. West Trucking traveled millions of miles, visited or traveled every state in the continental United States and made an occasional stray into Canada and Mexico. He traveled across the country with the familiarity that most travel through their hometown. However, in 2003, he put away his Road Atlas and retired to stay home and enjoy his family. He was born January 14, 1937 in Severn, Virginia, the third child of the late Irving, Sr. and Irene Deal West. In addition to his parents, Brother Irving, Jr., (Nell), brothers-in-law Gene Riddle and Rodgers Brown preceded him in death. Survivors include his wife of 64 years Nina Clements West, daughters Cindy Ray (Gaylord), Patty Ellis (Randy), son Michael West (Kelly), grandchildren Justin West (Alison), Connor West, great-grandchildren Carter and Anna West, sister Patricia Fay Riddle, sister-in-law Rachel Brown, Brother-in-law Charles Clements (Susan), as well as numerous nieces and nephews. A graveside service conducted by the Reverend Dr. Richard Croxton, will be held 1:00 p.m. on Wednesday February 3, 2021 at Providence Baptist Church Cemetery. The family would like to thank the staff of Heron Cove 1 in Gloucester and Riverside Walter Reed Hospice for their compassion and care of our loved one. Should friends desire memorial contributions may be made to Abingdon Volunteer Fire & Rescue, PO Box 9, Bena, VA 23018 or Providence Baptist Church Cemetery Fund, 3501 Providence Road, Hayes, VA 23072. Services under the direction of Hogg Funeral Home.

The family of Carlton Lee West created this Life Tributes page to make it easy to share your memories.