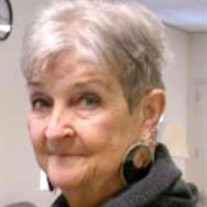 Local artist, Carrie Fields Kitchell, has gone to paint scenic backdrops with the greatest painter of them All. She departed for this trip from the Memory Care Unit at Gloucester House although she called Wicomico home since 1953. Her parents, Miza and Wyndom Fields, brother, Charles Henry Fields, sister, Linda Marshall and beloved husband, Jim Kitchell greeted her as she arrived at the pearly gates on January 19, 2020. Carrie led a memorable life. If you ever met her, then you have a memory and/or a story to tell. The remaining family have plenty of stories to tell! Staying behind are her four children: Janet Jenkins, Kim Leggett, David Savage and Carrie Savage; two son in laws: Tommy Leggett and Tim Tuggle; two granddaughters: Stephanie Landry (John) and Jennifer Savage; four grandsons: David Savage, Tom Leggett (Christiane), Boe Savage (Ashley), Dustin Savage (Kiersten); two granddaughters: Angela Savage and Shelby Savage; and seven (7) great grandsons: Elijah, Landon, Tommy, Charlie, A.J., Ashton and Brandon; two great-great-granddaughters and one great-great-grandson. Carrie is survived by her brother, W. Howard Fields and her special nephew, Eli Fields. She is also survived by her niece, Patricia Verdone who she loved dearly. Carrie began her art career early on by studying with the locally famous Barclay Sheaks and never stopped learning. Her other interests were local homeless animals so she used her talents to raise money for the Gloucester Mathews Humane Society in memory of her good friend Dr. Cindy Rhodes. She worked with the Courthouse Players painting sets and stage managing plays for many years. Other organizations that she was affiliated with were The Historical Society, The Genealogical Society, The Red Hatters, Severn Republican Women and The Women of the Moose. Services will be private so she would suggest that you consider adopting a shelter pet and live life to the fullest! If you feel so inclined to make a donation, we suggest memorial donations to the GMHS, Post Office Box 385, Gloucester, VA 23061 or ALZHEIMERS Association 4600 Cox Road, Suite 130, Glenn Allen, VA 23060. Services under the direction of Hogg Funeral Home.

Local artist, Carrie Fields Kitchell, has gone to paint scenic backdrops with the greatest painter of them All. She departed for this trip from the Memory Care Unit at Gloucester House although she called Wicomico home since 1953. Her parents,... View Obituary & Service Information

The family of Carrie Fields Kitchell created this Life Tributes page to make it easy to share your memories.

Send flowers to the Kitchell family.