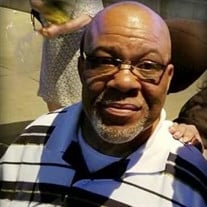 Carroll Tyrone Perrin, a native of Gloucester County, age 62, passed away peacefully at his home in Richmond Tuesday, October 2, 2018. Carroll was an avid Washington Redskins fan. His daughters described their Dad as a man of integrity and compassion to his core. A real source of strength and perseverance will be his legacy. While he will be missed here, he has been greeted in Heaven with a joyful and long–awaited reunion of family and friends. Once Carroll graduated high school he went on to pursue a career with the military. While stationed in Panama he met Silvia Moreno and they were married in Fort Hood Texas. They had 2 children which they raised in Newport News Va. Once a civilian again he spent many years working as a mechanic for different companies. Later on in life Carroll met Mollie Bailey and as a couple they relocated to Richmond Va. with son Elias Bailey. While in Richmond, Carroll fell victim to a robbery and was physically attacked. That attack resulted in becoming quadriplegic. Carroll had to learn how enjoy life again and grew closer to the lord, his family, and friends for support. He has been blessed to see Elias grow as an international bassist and witness his loving daughters embrace motherhood making him a granddad to 6 wonderful children, his legacy will continue through them. Parents, James T. Perrin, Jr., and Constance Gregory Perrin preceded him in death. He is survived by two daughters, Katherine Edith Wanzer (Antonio Tyrone Wanzer), Carol Ann Perrin and their mother, Silvia Perrin; 6 siblings, Edith Perrin, Debora Conyers (Frederick), son, Shaun Conyers, Denise McCray, son, Kevin McCray, Jr. and daughter, Sherice, James T. Perrin, III, daughter, Jamieka, John L. Perrin, daughters, Nya Johnson (Calvin) and Nashaye Ross (Marcus), Benjamin Perrin (Christea), daughter, Alexis and son, Preston; 6 grandchildren, Paris Perrin, Desmond Perrin, Skarlet Perrin, Kaila Hightower, Bryson Wanzer and Kendrick Wanzer; aunt, Francis Grasty; lifelong companion, Mollie Bailey and her son, Elias who Carroll loved as his own son; as well as a host of nieces, nephews and cousins. A Celebration of Life Service will be held 12:00 pm Monday, October 8, 2018, at First United Baptist Church, 6188 George Washington Memorial Highway, Gloucester, VA 23061, conducted by the Reverend E. R. Graham. Interment will follow in the church cemetery. The family will receive friends Monday from 11:00 am until 12:00 pm before the service. Flowers are welcomed or for those who desire, memorial contributions may be made to First United Baptist Church Building Fund. The family would like to share a special thank you to Kanawha Personal Care who provided the CNA’s to comfort our father and the following: Schelnette Gary CNA, Jeannie Cornell Yingling CNA, Elsie Gillison CNA, Jessica Childrey CNA, Dr. S. Crossland, Carol Booth, NP, Johnston Willis Hospital, Hospice of Virginia, Encompass Health Care and Jessica Allen LPN.

Carroll Tyrone Perrin, a native of Gloucester County, age 62, passed away peacefully at his home in Richmond Tuesday, October 2, 2018. Carroll was an avid Washington Redskins fan. His daughters described their Dad as a man of integrity and compassion... View Obituary & Service Information

The family of Carroll Tyrone Perrin created this Life Tributes page to make it easy to share your memories.

Send flowers to the Perrin family.