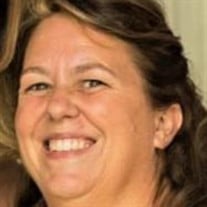 Catherine “Cathy” Courts Weathers, 56, of Gloucester entered into eternal life in the evening of January 26, 2022, after a courageous battle with cancer, holding the hand of her loving husband Mike. Cathy was born on June 28, 1965, in Chapel Hill, NC. After an early life of travels as a “Navy brat”, she grew up in the Kempsville area of Virginia Beach, where she set roots. Cathy graduated from Green Run High School and was an active member in the marching band and cross-country team. She later attended UNC Chapel Hill. She worked as a pastry chef at the Omni Hotel and later as a teacher’s aide for special needs students in the public school system. Cathy was an accomplished quilter in the area- teaching classes and making many friends in the quilting community. She was also a cherished sister in the Rebecca Lloyd Tabb chapter of the UDC. Above all, Cathy was a compassionate and nurturing soul who loved to cook for her family and friends, made gardens bloom, and cared for all of God’s creatures. Cathy was preceded in death by her parents David Courts and Linda Swaringen who she is finally reunited with. Left to honor her memory are her three sons, Clay and fiancé Sara, Cullan, and Connor. She also leaves behind her siblings Liana and Michael and sister-in-law Mary. In addition to raising her own three boys, Cathy was a second mother to many of their friends. She will also be missed by her pack of dogs, cat, and the many wild birds she fed. Cathy will live on in the lives of her tribe of a family- a multitude of nephews, nieces, aunts, uncles, cousins, relatives, and friends. A funeral mass, officiated by Father Gregory Kandt will be held on Friday, February 11 at 6:00 pm at the Church of St. Therese, 6262 Main Street, Gloucester, VA 23061. Inurnment will be private. In memory of Cathy, memorial contributions may be made to the Gloucester-Mathews Humane Society at P. O. Box 385, Gloucester Virginia 23061, or a tree can be planted in her memory at www.americanforests.org . Services under the direction of Hogg Funeral Home and Crematory.

Catherine &#8220;Cathy&#8221; Courts Weathers, 56, of Gloucester entered into eternal life in the evening of January 26, 2022, after a courageous battle with cancer, holding the hand of her loving husband Mike. Cathy was born on June 28, 1965,... View Obituary & Service Information

The family of Catherine "Cathy" Courts Weathers created this Life Tributes page to make it easy to share your memories.

Send flowers to the Weathers family.