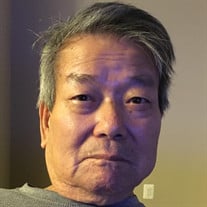 Chin Tai Jung passed away peacefully to join his beloved wife and family in heaven on Saturday, August 15, 2020 in his home surrounded by family. He gave over 80 years of devotion as a son, brother, husband, father, and grandfather. Chin Tai was born in a small village on the outskirts of Seoul, South Korea on January 12, 1937. He faced many challenges, losing his father, Kum Sung Jung, and other family members at a young age as well as living through the Korean War. He was raised with his surviving siblings by his mother, Bun Yi Lee, and grandmother. Chin Tai met his wife, Bok Hee Kim in 1957 who shared the dream of starting a new life in pursuit of the American Dream. With his “Never Give Up” attitude, after facing many hardships, he successfully immigrated to the United States with his wife, three sons, and daughter in 1974. Although the transition to America was formidable and challenging, through his never-ending hard work and grit, it became one of his greatest accomplishments, as he succeeded in creating a beautiful life for him and his family in the USA. One of Chin Tai’s greatest joys was meeting new people and creating new bonds. There existed no concept of a stranger to him; he would treat everyone as if they were an old friend. During his time in America, Chin Tai accomplished many feats— earning his citizenship in 1980, buying his first home in Hampton, VA, establishing several successful businesses, and nurturing the growth of his children and grandchildren while providing endless love and support. He lived 62 years of his life with his beloved wife, Bok Hee, at his side. He was as much a devoted husband as he was father. After over a year apart, Chin Tai has at last left this Earth to reunite with his wife whom he loved so dearly. Surviving Chin Tai are three sons, Won Young Jung (deceased) and wife Ki Ae of Queens, Ho Young Jung of Hampton, Ki Young Jung and wife Shirlyn of Chapel Hill, one daughter, Yusun Spitzer and husband Terry of Virginia Beach; ten grandchildren, Jessica, Stepheny, Kevin, Ted, Vivian, Brian, Kaitlyn, Rene, Zion, and Tara; and a number of nieces and nephews. A private farewell gathering will be held at his gravesite at Windsor Gardens Cemetery in Dutton, VA. Services under the direction of Hogg Funeral Home.

Chin Tai Jung passed away peacefully to join his beloved wife and family in heaven on Saturday, August 15, 2020 in his home surrounded by family. He gave over 80 years of devotion as a son, brother, husband, father, and grandfather. Chin Tai... View Obituary & Service Information

The family of Chin Tai Jung created this Life Tributes page to make it easy to share your memories.

Send flowers to the Jung family.