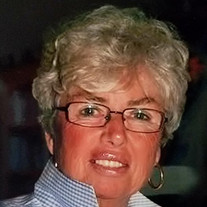 Gloucester: Darlene Geer Cumberland entered this world April 13, 1938 and passed away on January 23, 2017 after a courageous 15-month battle with lung cancer. She was surrounded in her home by her family that she had carefully tended and loved. Darlene had a rare gift. She viewed the world realistically; and effectively managed the people in her wide circle with wisdom and humor. She was the bright light in every room and every circumstance. She adored her husband of 56 years, Bill, loved her four children, Tracey Cumberland, Bill Cumberland, Jr., Kristen Cumberland Shiveley, Courtney Cumberland, was thankful for her daughter-in-law, Jennifer Asbra Cumberland and her son-in-law, Wayne Shiveley, and cherished her ten grandchildren, Elizabeth, Christine, Hunter, Will, Claire, Adam, Grace, Tyler, Ellie and Lily. Darlene was raised in Catonsville, Maryland and attended Notre Dame Preparatory High School in Baltimore and Mary Washington College. She would say she found her “true north” at age six when she met Bill. Over time and summer vacations at Colonial Beach, their friendship grew into love and they were married, January 28, 1961. They raised their four children in Fairfax where they lived for over 30 years before retiring to Gloucester in 1993. She quickly found the fun in responsible causes and formed deeply loyal friendships. She loved being part of The Garden Club of Gloucester, Gloucester Free Clinic, various golf and mahjong groups and her weekly “besties” gin group, the JUGS (Just Us Girls), Abingdon Episcopal Church Altar Guild, Ware River Circle of Kings Daughters, and Book Bag Babes. A service to celebrate Darlene’s life will be held at Abingdon Episcopal Church, Gloucester, on Saturday, February 11 at 1:00pm followed by a reception at the Cumberland home. In lieu of flowers, contributions may be made to Riverside Foundation-Riverside Cancer Care Services– “Dr. Mark E. Ellis Endowment Fund for Cancer Care Advancement.” www.riversideonline.com

Gloucester: Darlene Geer Cumberland entered this world April 13, 1938 and passed away on January 23, 2017 after a courageous 15-month battle with lung cancer. She was surrounded in her home by her family that she had carefully tended and loved. Darlene... View Obituary & Service Information

The family of Darlene Geer Cumberland created this Life Tributes page to make it easy to share your memories.

Send flowers to the Cumberland family.