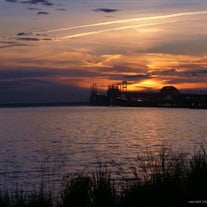 David Lewis, 62, lifelong native of Gloucester, passed away on December 21, 2020. David was a devoted husband of 40 years to Peggy, an incredibly loving and attentive father to Jennifer (John) and Kim (William), and the most adoring, playful, and silliest Pop to Carwyn and Carys. He is also survived by his mother Shirley, brother Scott, nephew Noah, and by his first love, his ‘69 Mach I. He is preceded in death by his father, Berkley Lewis. David loved his family selflessly and with a quiet, relentless energy. He recognized the value of time, especially during the past two years, and never missed an opportunity to have a family meal, outing, or activity. He especially enjoyed planning his family’s annual vacations, and in recent years, the annual OBX pilgrimage produced countless rounds of croquet, and many trips to Booty Treats. David loved sleepovers with the kids and grandkids. He was Carwyn’s best buddy, and beamed when his grandson frequently proclaimed, “Pop...you’re a genius!” Some of his most relaxing times were spent on his boat with Peggy or at a cruise-in with his car club. David also took up running in his mid-50s and enjoyed the friendships he built through his participation in many local races. David was known for his attention to detail, precision, and ability to solve almost any problem. He could always be counted on to execute a near-perfect plan, and then to do it again because it could be done just a little better. He ritually mowed the lawn, painted the house, cleaned cars and changed oil, swapped batteries in smoke detectors-- in other words, he was a real Dad. In the midst of any of those tasks he dispensed his own quiet brand of love and attention that made him so unique and cherished, and he never seemed too busy, even though he was never idle. While David made many enduring friendships and was grateful for his career, he often said, “work is a four letter word,” and thus it is intentional that little mention be made of his employment or the very cool things he built during his time at Dare Instrument and his career with NASA. David rallied energy at the end of his life to express to his family his desire that those he loved would join him in heaven. This is a testament to how seriously he believed that we do have something more to hope for, and that is eternal life with Jesus Christ. The community of faith and friendship at Bethany United Methodist Church has been integral in David’s life, and the family requests that any memorial contributions be made to the Pastor’s Discretionary Fund at Bethany UMC, PO Box 527, Gloucester Pt, VA 23062. A celebration of David's life will be held in a few months, when the weather is more favorable, and his family will ensure the information is made public. Services under the direction of Hogg Funeral Home.

David Lewis, 62, lifelong native of Gloucester, passed away on December 21, 2020. David was a devoted husband of 40 years to Peggy, an incredibly loving and attentive father to Jennifer (John) and Kim (William), and the most adoring, playful,... View Obituary & Service Information

The family of David Lewis created this Life Tributes page to make it easy to share your memories.

David Lewis, 62, lifelong native of Gloucester, passed away on...

Send flowers to the Lewis family.