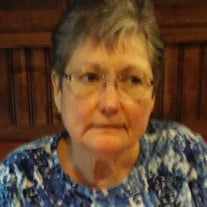 Diane Kay (Rees) Loddy, age 68 of Hayes, died at her home on February 21, 2020. She was born September 28, 1951, in Council Grove, KS to Shirley M. (Burton) Rees and Donald G Rees. She spent most of her early years in Council Grove, except for six years (1960 - 1966) in Fremont, NE. She graduated from Council Grove High School in 1969. During her adult life, she lived in many states (Colorado, New Mexico, Louisiana, North Carolina, and Virginia) and worked at several different jobs. When she retired, she was working for the state of Virginia as manager of an ABC store. In 1975 she married James Loddy in Denver, Co. They lived in Chama, NM, where they owned and operated Kelly's Restaurant for several years before separating. Upon returning to Council Grove, she worked at Wolf Creek Nuclear power plant during its construction. There she met second husband Royce Harrison with whom she spent the next 22 years in Virginia until he passed away in 2006. For the last 13 years, she and her third husband, James Poole, have lived in Hayes, VA. She was preceded in death by Royce Harrison, both grandparents, Benton and Elsie Burton and Harry and Anna Rees, father Donald G. Rees, brother Donald W. Rees, aunts Fern Metzger, and Bea Wessel, and uncle Carl Metzger Sr. James Poole survives her, mother Shirley Rees, uncle Henry Wessel, cousins Barry Wessel (Jill), Carol Spencer (Steve), Keith Wessel (Alicia), and Michelle Wessel, and Carl Metzger Jr. (Janice), and Sharon Fritch (Frank), step-daughter Nicki Toler (Tim), step-grandchildren Katelin Toler, Kendal Toler, stepmother, Patricia Lapham, step-sister, Sandra Adams, step-brother, Steve Brockelman. Diane was a competitor and brought home many ribbons swimming with the local swim team in her youth. She had artistic talent, which was evident in her home and anything she touched. She was a talented seamstress and liked to cook, producing many excellent meals. She was diagnosed with ALS in 2018. A celebration of life service will be held 11:00 am on Tuesday March 3, 2020 at Gloucester Church of Christ, 2432, Hayes, Road, 23072. The family would like to extend a special thank you to Hospice of Virginia, Encompass Home Health Care, the staff at Riverside Walter Reed Hospital and Dr. John Livingstone and staff.

Diane Kay (Rees) Loddy, age 68 of Hayes, died at her home on February 21, 2020. She was born September 28, 1951, in Council Grove, KS to Shirley M. (Burton) Rees and Donald G Rees. She spent most of her early years in Council Grove, except for... View Obituary & Service Information

The family of Diane Rees Loddy created this Life Tributes page to make it easy to share your memories.

Send flowers to the Loddy family.