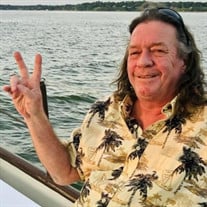 Dirk Emmet Paul Luke Parker, (A.K.A. DIRKO, Mr. Parker, Daddio, The Dude, & Bro.) The Man, the Myth, the Legend, passed away unexpectedly on February 10, 2021. Dirk’s memory will be cherished and kept alive by his beloved wife Theresa; his children; Frederic Parker, Allyson Elkatcha (George, Ellowyn, Baby E arriving any day), Emily Parker (Scarlette, Juliana); his brothers Drew Parker (Tammy), Dean Parker (Teri), Donn Parker (Shelly), his sister Dene Slusser, his brother-in-law Daniel Slusser; his step-children Katelyn Murter (Jacob), Alex Gibbs (Danielle), Aleena Antle (Henry, Holden), Natalie Antle (Rielyn, Grayson, Amelia), Samson Bevins, Salena Bevins, Sydney Bevins, and Lydia Hartzler; and so many nieces, nephews, cousins and dear friends that we cannot list them all. Dirk was proceeded in death by his father, Donald W. Parker; mother, Beverly Parker-Bertoia; his step-father; Pete Bertoia, brother; Dana Parker, niece; Kali’ Parker, and sister-in-law; Tammy Parker. Dirk was born at Riverside Hospital in Columbus, OH. on May 16, 1957. He graduated from St. Francis DeSales High School in 1975. He took pride in attending “THE” Ohio State University, where he graduated with a Bachelor’s degree in Sociology. “Buckeye Born, and Buckeye Bred, and When I Die, I’ll be Buckeye Dead!” A Buckeye fan he truly was. Dirk and his mother were founders of the first Dirko’s Pizza in Columbus, OH. in 1980. He was the first groundskeeper at Schnormeier Gardens in Gambier, OH. He claimed this to be one of his greatest professional accomplishments and the garden was his sanctuary. Dirk felt privileged to have been a Child & Family Advocate in the Knox County Schools for several years where he touched the lives of so many families eventually becoming Advocate of the Year. Coaching baseball was one of his greatest joys in life. Stating, “The Little Engine That Could” was the greatest baseball book ever written. “I think I can. I think I can. I think I can.” Always instilling confidence in his players. He taught many kids the game he loved. He had such a compassionate, kind heart, and was honored to serve as a 10-year volunteer with Hospice of Knox County. He also spent several summers as a counselor at Hospice’s “Camp Hope” helping children cope with the loss of a loved one. Dirk was a free spirit and had such a passion and joy for living. He worked hard, played hard, and loved even harder. He was a humble man and claimed, “I am who I am”. With Dirk, you got what you got and he was not ashamed of who he was. Dirk was a man of many adventures. He loved the beach, skiing, camping, and dancing. He truly was the “Life of the Party”. “If you’re not living on the edge, you’re taking up too much space!” This was one of the many mottos he lived by. The oldest of six, he loved his siblings very much and was diligent about keeping in touch with them even when separated by distance. He made sure they knew how much he loved them. He was a family man and was always looking out for his siblings. They truly have stuck together through thick and thin, and as much as he has had their backs, they have also always had his. He was proud of where he came from, the stories he had, and mainly the memories he continued to make throughout their lives. Those who knew Dirk, knew that being a father was Dirk’s greatest joy in life. He was so proud of his kids. Not only was he a great father, he was a great mentor. He sacrificed his entire life to be the best dad a child could ask for and THAT he REALLY was. He was not afraid to stand up for what he believed in and took pride in raising his children to be independent, just like him. Being a “Paw-Paw” brought him so much happiness. Dirk had been excitedly awaiting the birth of his fourth grandchild, who will be arriving very soon. Dirk married the love of his life, Theresa on May 1, 2019. They dated in the 1980s and fate brought them back together again. There was no doubt that she was Dirk’s angel and brought so much love and care to his world. They spent the last year achieving their dream of opening Daddio’s Subs & Stuff in Gloucester, Virginia. Where customers are greeted with, “What’s up Daddio?” in honor of his dear late friend Uncle Wally. This brought many smiles to many faces. He truly achieved everything his heart had desired in life. Those who know him, KNOW Heaven just got a little bit brighter. A Celebration of Dirk’s life will be held at Devore-Snyder Funeral Home in Sunbury, Ohio on Saturday February 20th, 2021. Calling hours will be held from 11:00 am to 1:00 pm and from 3:00 pm to 5:00 pm. Family is requesting a laid-back, casual event in memory of Dirk (wear your favorite t-shirt). A private memorial service will be live streamed at 6:00 pm. Contributions can be made in Dirk’s memory to Hospice of Knox County.

The family of Dirk Emmet Parker created this Life Tributes page to make it easy to share your memories.

Send flowers to the Parker family.