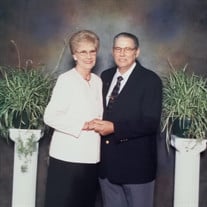 On Thursday, April 16, 2020, Douglas Shrewsbury, loving husband, father, grandfather and uncle, took a seat at the Masters Table joining loved ones gone on before him. He was just shy of his 77th birthday. Doug is survived by his soul mate of 58 years, Faye, his only child, Annette, and her husband J. Kevin Gilbert, his only grandchild, Jamie Marie Gilbert and her boyfriend Josh Parsons. He is also survived by some very special nieces and nephews who were of great help to him and Faye for many years, Marcella Graham of Odd, WV, Melissa Lusk Suttles and her husband Tony of Mechanicsville, VA, Loran Lusk of Yorktown, VA, Doris Graham Cooley of Dallas, NC, and Deanna Sheets of Odd, WV. Other surviving family members are brothers-in-law Orvel Lusk (Barbara) of Glen Daniel, WV; sister-in-law Gladys Lusk; Beecher Lusk (Nadine) of Yorktown, VA; and sister-in-law Ellie Graham of Odd, WV. His sisters Vadah Phillips of Corinne, WV; Lena Buchanan (Thomas) of Yorktown, VA; Frances Canada of Oak Hill, WV; Shirley Bishop (Merle) of Summersville, WV; Goldie Shrewsbury (Curtis) of Sophia, WV; and Darlene Clay (Edward) of Georgetown, KY and his only brother Kyle Shrewsbury (Drema) of Beaver, WV and many generations of nieces and nephews. Doug was born on May 2, 1943 in Mullens, WV to Grover and Lois (McKinney) Shrewsbury. In 1962 he graduated from Mullens High School and the Wyoming County Vocational-Technical Center. After graduation he hitchhiked to Newport News to apply for a position at the Newport News Shipyard as a machinist. He worked for a couple of weeks and then returned to WV to marry the love of his life, Faye Marie Lusk, on June 30, 1962. They lived in Newport News and then Hampton. Their only child Annette Marie was born in November 1964 and two years later they moved to Grafton, Virginia where they lived for 22 years. In 1988 they moved to Williamsburg where they remained for the next 30 years. For the last 4 years they have lived in West Point, Virginia. Doug worked at the Newport News Shipyard as a machinist in various departments for 43 years. Doug received many accolades and awards over the years at the Shipyard. At the time of his retirement he was designated as a Master Craftsman. Doug loved to go to parties so he got to enjoy a great retirement party in 2005. Niece and nephew Tammy and Pete Van Donk took Doug and Faye on an Alaskan cruise in celebration of his retirement. In retirement Doug loved to spend his time hunting deer and turkey, working around his house and spending time with his little family. Doug was an avid hunter and loved hunting first with his daughter then his grandbaby Jamie. He enjoyed hunting with his brother Kyle, son-in-law Kevin, and nephews Mitchell and Tony. He loved his family, country music, family reunions and having a good time! He always enjoyed a party and loved celebrating at his 25th, 40th and 50th anniversary parties. He was a fun person to be around, always told great stories and kept everyone in stitches. He will be missed by everyone who knew him. Doug was preceded in death by his parents, sisters-in-law Letha Lusk McKinney, Maxine Lusk McKinney, Brooke Lusk McKinney, Dessie Lusk Graham, Ruby Lusk White; brothers-in-law Ernest Lusk, Vernon Lusk, Buren Lusk, Denver Lusk and Paul Lusk; sisters Sadah Shrewsbury Steele Jackson and Alma Shrewsbury; one sister-in-law, Gordenia Hickok Shrewsbury; and two brothers-in-law, Ivan Phillips and Jack Canada. A private graveside service will be held on Monday, April 20, 2020 at Rosewell Memorial Gardens Cemetery in Gloucester, VA and officiated by a young man that Doug had the pleasure of seeing grow up Dennis Hollandsworth. Celebration of life ceremony to be held at a later date. Services under the direction of Hogg Funeral Home.

On Thursday, April 16, 2020, Douglas Shrewsbury, loving husband, father, grandfather and uncle, took a seat at the Masters Table joining loved ones gone on before him. He was just shy of his 77th birthday. Doug is survived by his soul mate of... View Obituary & Service Information

The family of Douglas Wayman Shrewsbury created this Life Tributes page to make it easy to share your memories.

Send flowers to the Shrewsbury family.