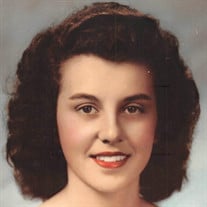 Esther Mae Belvin, of Achilles, VA, died at her home on March 24, 2020. Born September 12, 1935 to Elbert and Alice (Brown) Williams, she was a member of Union Baptist Church. She retired from the Gloucester County Public School System after serving 30 years as a bus driver. She also helped her husband Bennie with the operation of Belvin Seafood Inc. Funeral services, officiated by the Rev. Richard Whiteheart, were held Sunday March 29, 2020 at 2:00 p.m. at Gloucester Point Cemetery. Mrs. Belvin was laid to rest beside her husband of 59 years, Bennie Howard Belvin, near her Grandparents Phil and Daisy Brown. Due to the coronavirus, services were private. Attending the services were her daughter, Myron Belvin Hall with faithful husband Carlton; brother Paul Arthur Williams and wife Elva with their daughter and special niece, Paula Greeley; sister-in-law Sue Blake and husband Graham, who visited Esther Mae often. Representing Aunt Pearl’s Family (Billy and Patricia Hogge, and Betsy Oliver) was special friend, Nancy "Pearl" Forrest. Also attending were Leann Hull-Smith (the Best Caregiver Ever), and Linda Mcintosh, the Faithful Friend who visited often and who came every time she was called. Attending in spirit was "My Brother" in Mexico, Leobardo Villasenor Altamirano. A man of unwavering loyalty, he never forgot us, not once. God, faith, and friends; and one day at a time, made this eight year journey possible. Special THANKS! to so many friends; but especially Tammy Thrift, Steve Haag, Dave Shantz, Tommy and Paulette Ashe, Elaine Stubblefield, Helen Jenkins, Carolyn Neill, Kim Walthall, Irma White, and Mildred Hogge. Well Daddy, I looked after Mama as you told me. And as the man would say "I did the very best". Love you Mama and Daddy SO MUCH! Rest In Peace. Myron In Memory of our loved one, memorial gifts may be given to Union Baptist Church, 9254 Guinea Road, Hayes, VA 23072 OR Gloucester Point Baptist Church, P.O. 305, Gloucester Point, VA 23062.

Esther Mae Belvin, of Achilles, VA, died at her home on March 24, 2020. Born September 12, 1935 to Elbert and Alice (Brown) Williams, she was a member of Union Baptist Church. She retired from the Gloucester County Public School System after... View Obituary & Service Information

The family of Esther Mae Belvin created this Life Tributes page to make it easy to share your memories.

Esther Mae Belvin, of Achilles, VA, died at her home on March...

Send flowers to the Belvin family.