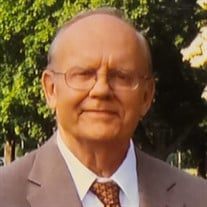 George M. James, age 81, of Gloucester, Virginia passed away on November 18th, 2021, "his weary feet having come to the end of their toilsome journey". George was born October 26th, 1940 in Utica, NY, the son of Arthur C. James and Nellie M. (Dziedzic) James. He attended Utica Free Academy until 1958 when at age 17, he enlisted in the Navy. Over the years, he was attached to 14 duty stations in many parts of the world, 7 of them aboard ships. Included in the service to his country were two consecutive combat tours in the rivers of Vietnam. Among the 15 service awards and medals, he wore on his uniform were the Navy Achievement Medal (with combat "V"), Good Conduct Medal (5 awards), National Defense Service Medal, Armed Forces Expeditionary Service Medal (Cuba), Vietnam Service Medal (7 awards), Vietnam Campaign Medal, Combat Action Ribbon, Navy Unit Commendation, Vietnam Presidential Unit Citation, and the Republic of Vietnam Gallantry Cross Unit Citation. George was extremely proud of his 20 years in the Navy and retired in 1978. George became employed by the Bendix Corporation in Utica, NY for 10 years in the Human Resources Department. While working at Bendix he attended Mohawk Valley Community College and then Utica College, evenings, gaining his Bachelor's Degree in Business Administration from Syracuse University in 1985. He continued his education with SUNY Binghamton at Griffis AFB where he accumulated 16 hours towards his Master's Degree. Following employment at Bendix, George joined Blue Cross Blue Shield of Utica-Watertown and in his 6 years with the organization, attained the position of Director of Provider Relations of Blue Care Plus and Director of Medicaid Manage Care. He was subsequently employed at other organizations, finally ending his full-time work life as a Case Worker for 5 years with the Madison County Department of Social Services, Wampsville, NY. Outside of employment, George was elected a Trustee for the Village of Vernon, NY in 1986 and served for two terms. He served as Treasurer of the Vernon Kiwanis Club in 1987 and was a member of Post #404 of the American Legion in Vernon. He enjoyed being active as a member in the Vernon Girl Scouts organization for many years, often serving as an assistant troop leader and chairperson of various committees. George was a very active member in Freemasonry, serving as Master of Sconondoa-Sherrill Lodge #814 F&A.M. in Vernon in 1995 and Secretary of the Lodge from 1999 to 2009. In 2008 he was selected to serve as Grand Steward of the Grand Lodge of New York for two years and subsequently served as District Deputy Grand Master of the 1st Oneida District from 2010 to 2012. In addition to the Vernon Lodge and activities in the Purple of the Fraternity, he was also a member of Clinton-Hampton Lodge #347 in Westmoreland, NY, Infinity Lodge #00, in Utica, a Charter member of Battle of Oriskany Post #55 of the Masonic War Veterans in Oriskany Falls, Melbourne Lodge #144 in Melbourne, FL, Fort Myers Beach Lodge #362 in Fort Myers Beach FL. George left a son and daughter-in-law, Michael James (Kristine), residing in Hayes, VA, and a daughter and son-in-law, Megan Romanowski (Brian), residing in Cape Coral FL. He had 5 grandchildren - Jonathan James (Kayla) of Frankfort, NY; Craig Barrows of Poland, NY; Amber Rose James of Hayes, VA; and Kaylee and Kiera Palmer, of Cape Coral, FL. In memory of George, memorial contributions may be made to Rainbow for Girls (Fidelity #30) at Tri-Valley Lodge No. 148 611 Stone St. Oneida, NY. 13421. Services will be held at Arlington National Cemetery at a later date. Services under the direction of Hogg Funeral Home & Crematory.

George M. James, age 81, of Gloucester, Virginia passed away on November 18th, 2021, "his weary feet having come to the end of their toilsome journey". George was born October 26th, 1940 in Utica, NY, the son of Arthur C. James and Nellie... View Obituary & Service Information

The family of George Michael James created this Life Tributes page to make it easy to share your memories.

Send flowers to the James family.