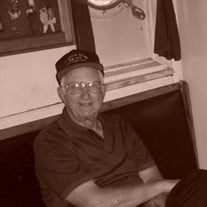 Gerald “Jerry” Minor, 94, went to be with his Lord on Sunday, April 18, 2021. His welcoming committee in heaven was sure to include his beloved wife Marjorie “Marty” Van Landingham Minor and his mother, father, brother and sister. Gerald and Marty had no children of their own, they cherished their Irish Setters and always had a love of extended family with all the Minor and Van Landingham relatives. Gerald was a teenager when he joined the Navy during World War II. He loaded ammunition on ships in Baltimore Harbor until the war was over. Then he started working for Dupont Corporation and kept their machines running for decades. Gerald was very creative, he could fix anything, he was hardworking and more than willing to share his expertise with anyone who needed help. Throughout his life, Gerald always returned to an area called Bena in Gloucester County, VA. This was “home” as he is a direct descendant of John William and Sarah Mouring Minor, who put strong family roots down along the York River in that area in the 1800’s. During leisure time Gerald was a talented waterman and an accomplished farmer. Marty was a pediatric nurse until Cancer took over. Gerald retired early and gently became her full-time caretaker and protector until she passed. Gerald remained very independent as he continued at home without Marty. After that, a neighbor invited Gerald to a Singles Dance Group and after a while he met Carol Callahan from Williamsburg. They were each driving halfway between their residences in order to meet and dance 2 to 3 times a week. This turned into a 20-year friendship. Gerald had a strong constitution and continuing to live at home was his choice. However, this year there were new physical challenges. Minors, Van Landinghams, Carol and friends are certainly going to miss Gerald. However, we join together to celebrate a long life well lived here on earth. Family and friends are welcomed to assemble for a graveside service to honor Gerald, at 2:00 PM, Friday, April 23, 2021 at Rosewell Memorial Gardens off Providence Road in Gloucester. In lieu of flowers, consider a donation to the Hospice House of Williamsburg, 4445 Powhatan Parkway, Williamsburg, 23188. They provided outstanding, gentle, compassionate, professional care to Gerald Minor in his time of need.

The family of Gerald "Jerry" Minor created this Life Tributes page to make it easy to share your memories.

Send flowers to the Minor family.