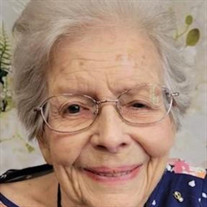 Gloria Ogden Hudgins, formally of Hayes, was peacefully called to her heavenly home on March 5, 2022, while she was in Connecticut. She was born in Norfolk, VA, raised in Mathews County, and as a young woman moved with her family to Alexandria. For many years, Gloria worked for Safeway as a cashier. While on vacation one summer, she met the love of her life, Bobby Hudgins, whom she married the following year. She then moved to Hayes, VA with her husband. She continued her career as a cashier and worked at Farm Fresh where she met many wonderful people in her community. She also enjoyed baking and cooking with the fresh fruits and veggies that Bobby would bring in each day from their lavish garden. She along with Bobby were faithful members of the Bethlehem United Methodist Church in Bena. After Bobby passed away in August 2017, Gloria moved to Waterbury, CT to be closer to her daughter, Dianne Elie. She moved to a beautiful assisted living facility where she was able to spend a lot of time with her granddaughter, grandson, and grandchildren. In addition to her husband, Sister Claudette Phillips preceded her in death. She is survived by her daughter, Dianne Elie and husband Edward; her granddaughter Lynsey Eite and husband Shane; grandson Sean Fishbein and wife Patti; great-grandchildren Connor and Caroline; nieces Debbie Burks and husband Fred, Carla Sturm; stepdaughter Cheryl Gibson (Fred); Ronnie Hudgins (Tish); step-grandchildren Brady, Matthew, Zachery, and Sarah. The family will receive friends Tuesday, March 15, 2022, from 10:30 am until 11:30 am at Hogg Funeral Home followed by a graveside service at Noon in Rosewell Memorial Gardens Cemetery officiated by Reverend Carol Bookwalter. In memory of Gloria, memorial contributions may be given to the church that she and Bobby loved so much, Bethlehem United Methodist Church, P.O. Box 185, Bena, VA 23018. Services under the direction of Hogg Funeral Home.

Gloria Ogden Hudgins, formally of Hayes, was peacefully called to her heavenly home on March 5, 2022, while she was in Connecticut. She was born in Norfolk, VA, raised in Mathews County, and as a young woman moved with her family to Alexandria.... View Obituary & Service Information

The family of Gloria Ogden Hudgins created this Life Tributes page to make it easy to share your memories.

Send flowers to the Hudgins family.