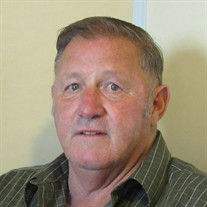 Williamsburg: Herman Waldon “Runt” Hogge, Sr. passed away at the Hospice house in Williamsburg, Virginia March 3, 2017. Runt was a Vietnam War Veteran, and worked at Anheuser-Busch, in Williamsburg, for many years. Being on the water was his passion, he went out in his boat every day before work, never missing an opportunity to do what he enjoyed. Runt loved his family and spending time with them every chance he got. Runt was a caring and generous man, he will be greatly missed by all who knew him. He is preceded in death by his parents, Horace W. Hogge and Margaret Lee Hogge. Runt is survived by his loving wife, Teresa Hogge; sons, Herman Hogge, Jr. (Lynn), James Hogge (Karla), Wayne Hogge (Lori), David Hogge (Jennifer) and Horace Lee Hogge; step daughters, Catina Hundley, Monika Hundley; step son, Clifton Hundley (Penny); sisters, Cynthia Tillage and Shelva Hogge; brother, Richard Hogge (Jackie); 13 grandchildren; 4 great grandchildren and a host of beloved nieces and nephews. A Funeral service officiated by Reverend Bill West will be 11:00 a.m. Tuesday March 7, 2017 at Hogg Funeral Home, Gloucester Point. Interment will follow in Providence Church Cemetery.The family will receive friends, Monday, March 6, 2017 from 6 until 7:30 pm. at the funeral home. In memory of our loved one, the family desires contributions be sent to the Hospice House and Support Care of Williamsburg, to whom the family wish to extend their thanks to all the beautiful caring staff there, that helped walk them through this trying time, 4445 Powhatan Parkway, Williamsburg VA 23188. At other times the family will be at the home of Cynthia Tillage, 7541 Dunston Drive, Hayes, VA 23072. Please visit www.hoggfh.com to share condolences and memories.

Williamsburg: Herman Waldon &#8220;Runt&#8221; Hogge, Sr. passed away at the Hospice house in Williamsburg, Virginia March 3, 2017. Runt was a Vietnam War Veteran, and worked at Anheuser-Busch, in Williamsburg, for many years. Being on the water... View Obituary & Service Information

The family of Herman W. "Runt" Hogge SR. created this Life Tributes page to make it easy to share your memories.