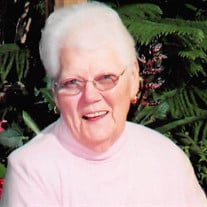 Gloucester: Born November 17, 1925, Hilda Mae Crockett Hogge, having experienced 92 years of rich, deep, impassioned life, left her place on this earth July 10, 2018. Married for 40 years, with a fierce love for her eight children, an independent and forceful spirit, a courageous posture that saw her wade through multiple tragedies, and a tenacious hold on Jesus Christ, she engraved her signature upon the world in which she existed. York County and its surroundings were her place. She drove a school bus for 25 years. Hilda was tireless in her needlework and continually outfitted myriads of children and adults with her creations throughout her live. She buried a husband and three sons. She was recognized as a Gold Star Mother by VFW Post 824, Grafton. She served for years in the Peninsula Rescue Mission Auxiliary. She sang with passion and strength. She rarely forgot a birthday or anniversary. Loyalty was a hallmark of all her relationships. You dared not challenge her in Yahtzee, for somehow, someway, as you glanced up, she would be enjoying her victory. She was so loved by her children, grandchildren, great grandchildren and neighbors. And thus, by any true measure, she was blessed. She was preceded in death by her parents, Judson and Thelma Crockett; husband, Garland G. Hogge, Sr.; sons, Garland Hogge, Jr., Charles N. “Boogie” Hogge and Douglas W. Hogge; sister, Gwen Moss; brother-in-law, Milan Moss; three granddaughters and one great granddaughter. She is survived by son, Thomas L. Hogge (Linda); daughters, Sandra Walker, Mary Lewis, Debra Alphin (Rex), and Ann Brinkman; daughter in law, Wilma Hogge; brother, Wayne Crockett (Ann); her dearly "adopted children" Tony, Heidi and Sharon; and a host of grandchildren, great grandchildren and great great grandchildren. Funeral service officiated by Reverend Lindsay Poteat will be 2:30 p.m. Friday, July 13, 2018, at Hogg Funeral Home, Gloucester Point. Interment will follow in Grafton Christian Church Cemetery. The family will receive friends Thursday evening from 7 until 8:30 p.m. at Hogg Funeral Home. The family extends their sincere appreciation to the special nurses and staff at Morningside Assisted Living, and Medi Home Health for the loving care given to Hilda and her family. In memory of our beloved mother, memorial contributions may be given to the Peninsula Rescue Mission, P. O. Box 377, Newport News, VA 23607 or the VFW Post 824, Grafton, 1700 Tabb Square, George Washington Mem Hwy, Grafton, VA 23693. Please visit www.hoggfh.com to share condolences and memories.

The family of Hilda Mae Crockett Hogge created this Life Tributes page to make it easy to share your memories.