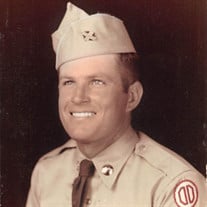 Gloucester Point: Jack West, 87, entered his heavenly home Sunday morning, September 24, 2017, welcomed by his beloved wife, Barbara. Jack a native of Gloucester served proudly in the U S Army and later retired from James River Reserve Fleet after 33 years of service. Jack attended Providence Baptist Church for a number of years. Jack was a loving, kind person and a true Christian gentleman. He was an amazing man, genuine and real, always smiling and had a kind word for everyone. He will be missed though heaven is rejoicing by his homecoming. He was preceded in death by his beloved wife, Barbara Jean West; parents, Frank and Blanche West; brothers, Chester West, James West, Morris West and George West; sisters, Lucy Evans, Hazel Glassco, Eva Mosley and Doris West. He is survived by brother, Ellis West and wife, Linda and their children, Gina L. Alley (Dean), Jason West (Kim) and Josh West (Christy Marshall); very special niece, Teresa Marshall; special sisters in law and brothers in law; and a host of nieces and nephews. Funeral service officiated by Reverend Chris McMillan will be 11 a.m. Wednesday, September 27, 2017 at Hogg Funeral Home, Gloucester Point. Interment with military honors will follow in Gloucester Point Cemetery. The family will receive friends prior to the service on Wednesday from 10 until 11 a.m. at the funeral home. Please visit www.hoggfh.com to share condolences and memories with the family.

The family of Jack West created this Life Tributes page to make it easy to share your memories.