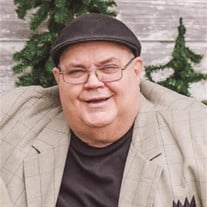 Bishop James Richard Ashby was born on December 19, 1955, to Clarence and Virginia Ashby in Richmond, Virginia, and finally received his rest from a long struggle with illness early in the morning on April 14, 2019. His birth and death are not nearly as notable as the days in between. James was the youngest boy of ten children. Ever the suave charmer, he made many friends and also excelled in sports becoming the captain of the baseball and football teams as a student at Osborn High School in Manassas, Virginia. He received a football scholarship to Bluefield State University. He ran far from his calling as a minister of the gospel but fully surrendered his life to the Lord shortly before meeting and marrying the love of his life, Natalie Towe, at the Glenrock Church of God in Norfolk, Virginia in 1983, and went on to have four children. James received his licensure in the Church of God and served as Pastor of the following locations in the state of Virginia: Colonial Beach Church in Colonial Beach, Vera Church of God in Appomattox, and Franklin Church of God in Franklin. He proudly served several terms on the Church of God State Youth Board and State Evangelism Board as well as the City of Franklin Ministerial Association. He mentored many young men and women over the years, several of whom have also gone into the ministry. He always went the extra mile for his family, his friends, and especially for those that needed his strong shoulders to cry on and a coach to carry them through the joys and struggles in their lives. He grieved the losses of many loved ones, namely his father and mother, Pastor Clarence and Virginia Ashby; sisters: Sharon Young and Linda Runyon; brothers Stephen Ashby and Timothy “David” Ashby; and father-in-law, Bishop Nathan Towe. Left behind to carry on James’s legacy are all of those that he considered to be his pride and great joy: his beloved wife of 35 years, Natalie; his four children and seven grandchildren, Anna Ayers with Dustin, Connor, Knox and Grant, Joshua Ashby with Bekah and Aubre, Sarai Meador with Ashby, Mikah, Isabella, and Shekinah, and Aaron Ashby; sisters: Jacqueline Taylor, Rachel Tribble, and Judith Hopkins; and brothers LTC (R) Phillip Ashby and Joel Ashby. We welcome you to join us on Thursday, April 18, 2019, for a visitation from 10:30 until 11:30 am with a funeral service following at 11:30 am at World Outreach Worship Center located at 1233 Shields Rd, Newport News, VA, 23608. Interment will be private immediately following the service. Our sincerest gratitude is extended toward Pastors Russell & Sylvia Evenson and members of WOWC as well as Dr. Robert Mann, Dr. Robert Michael Camp, and the caring staff of Sentara Norfolk General Hospital, Duke University Medical Center, Sentara Hospice House, and Hogg Funeral Home of Gloucester Point. In the memory of our loved one, memorial contributions may be made to Hope Charitable Services at P. O. Box 7816, Portsmouth, VA, 23707-0816, or visit hopecharitable.org. While we are mourning the loss of the most loving man we have ever known, we take comfort in knowing that he lived a tough but full and happy life, and we are honored to celebrate the dash between the day he entered this world and the day he left it. We encourage you to do the same.

Bishop James Richard Ashby was born on December 19, 1955, to Clarence and Virginia Ashby in Richmond, Virginia, and finally received his rest from a long struggle with illness early in the morning on April 14, 2019. His birth and death are... View Obituary & Service Information

The family of Bishop James Richard Ashby created this Life Tributes page to make it easy to share your memories.

Send flowers to the Ashby family.