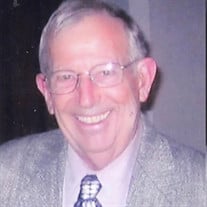 James Archie Leigh, age 93 of Hayes, died on July 22, 2021, at Gloucester House surrounded by his beloved family. Archie was born to the late Hansford Archie Leigh and Martha Elizabeth Horsley Leigh on October 2, 1927, in Gloucester, Virginia. He was one of 9 children. In the following year, he was Christened at Abingdon Episcopal Church. He graduated from Botetourt High School in 1945. In August of 1945, Archie became a Merchant Marine, he then married Mary Harris Leigh in December of 1947 before enlisting in the US Army in 1950 and achieved the rank of Sargent. He retired as a Food Service Supervisor at McDonald Army Hospital at Ft. Eustis, Newport News. After his retirement in 1982, he joined the staff of Hogg Funeral Home. Archie was a very active member of Bethany United Methodist Church. He became a member in 1948 after transferring his membership from Bellamy United Methodist Church. He served as a Trustee of Finance, Stewardship, Nominations, Personnel, District Steward, Lay Speaker, District Conference Delegate, and Annual Conference Delegate. At the Annual Conference, he served on a Board of Laity, Board of Evangelical, Board of Directors of Family Services, and VUMAR. In the Rappahannock District, he served as a District Lay Leader, Delegate Annual Conference, Director of Lay Speaking, Director of DOM, Revitalization Committee, Director of Superintendency, and Chairman of District Finance Committee. In addition, he was a founding member of the local Gloucester camp for Gideons International Ministries. Archie was very involved with his family. He served as President of the PTA at Abingdon Elementary School. He was the Scoutmaster of Cub Scout Pack 113. He was a very active supporter of Abingdon Elementary, Gloucester Intermediate, and Gloucester High School activities. He volunteered his time by preparing countless church and school dinners to help raise funds for many community projects. Archie was preceded in death by his first wife of 56 years, Mary Harris Leigh, infant daughter Marcia Lynne Leigh and siblings Elizabeth Mills, Curtis Leigh, Herbert Leigh, Frances Diggs, and Gene Leigh. Archie is survived by his wife Loretta Jackson; three children, James S. “Jim” (Ellen), Timothy A. “Tim” (Cathy), and Debra L. “Deb” Ottarson (Robert): five grandchildren, Chelsea D. Leigh, Alan R. Ottarson, Jeffrey S. Leigh (Beth), Jason T. Leigh and Mary Morgan Leigh, two great-grandchildren; and three brothers, Fred Leigh, Bobby Leigh (Nan), Henry Leigh (Betty Jean) and sister-in-law Marie Leigh. The family will receive friends on Sunday, July 25, 2021, at Hogg Funeral Home from 6:30 to 8:00 pm. A celebration of life service, officiated by Reverend Paul Song and Reverend Mike Derflinger will be held at 11:00 a.m. Monday, July 26, 2021, at Bethany United Methodist Church. Interment will follow in the church cemetery. A reception will be held in the church fellowship hall. In our loved ones memory, memorial contributions may be made to Gideons International, 6356 Main Street, Gloucester, VA 23061. Services under the direction of Hogg Funeral Home.

The family of James Archie Leigh created this Life Tributes page to make it easy to share your memories.

Send flowers to the Leigh family.