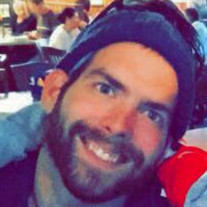 Hayes: James Scott Newsome Jr., born on September 6th, 1990 was 26, when he was taken from the world suddenly early morning on September 25th, 2016. He is survived by his mother, Jeanne G. Newsome; father, James S. Newsome Sr.; sisters, Nicole M. Newsome, Christine D. Newsome, Brittany M. Newsome (Tyeler F. Knights), Alexis G. Newsome, and Melissa N. Newsome; grandfather, Jerry T. Pittman and grandmother, Marcelle L. Pittman; nephew, his pride and joy, Chase A. Newton. His favorite furry companions, Leroy and Bella; and finally his brothers by heart, Trevor A. Fowler and Jason A. Newton. James had an infectious smile, and love for the world. He could light up a room, and touch the hearts of anyone he met with his good vibes and positivity. Nothing was more important to James than his family and friends. He was a father figure to his sisters, a die-hard New England Patriots fan, and a lover of fishing and salt water. His work ethic was unmatched, and the Yorktown Pub will always remain his second family. A celebration of life officiated by Reverend Kenneth Waclo will be held 11 a.m. Saturday, October 1st, 2016 at Hogg Funeral Home, Gloucester Point. The family will also be receiving family and close friends Friday, September 30th, 2016, from 7 until 8:30 p.m. at the funeral home. Family and friends may share condolences and memories at www.hoggfh.com

The family of James Scott Newsome Jr. created this Life Tributes page to make it easy to share your memories.

Send flowers to the Newsome family.