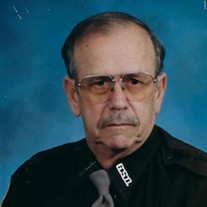 Jerry Dean Little, age 78 of Gloucester, died at his home on February 6, 2021, with his family by his side. Jerry joined the US Coast Guard in 1959, entering boot camp in Cape May, New Jersey; following boot camp, he was stationed on the Coast Guard Cutter Salvia, and the AXE, in the Philippines, Florida, Alabama, Washington State, Maryland, and Virginia. He served as the Officer in Charge (OIC) at West Point Light Station, Seattle, Washington; OIC Taylors Island, MD. He was an instructor at the USCG Training Center Yorktown's Maritime Law Enforcement School. After 26 years, he retired as the OIC at Station Milford Haven and Matthews, Virginia, as a Senior Chief Boatswain Mate. In 1985, after he retired from the USCG, he began his second career with the Gloucester County Sheriff's Department. During his time as a Deputy Sheriff, he worked in Civil processing, served warrants, and was a backup for the road Deputies, retiring a second time as a Master Deputy after 20 years. Jerry volunteered at Gloucester County Polls, picked up and dropped off the voting machines; a member of Gloucester and Middlesex Counties Lyons Club; he enjoyed riding his green John Deere grating the driveway and annoying Chris, his neighbor who has an orange tractor. He learned to enjoy watching golf with his wife, fishing, barbecuing, going to breakfast to eat with the "breakfast bunch," and he loved being with his children and grandchildren and playing cards. Survivors include his wife, Barbara S. Whitley, Daughter's Lynn Little and her wife Jheri, Kimberly Lisella and her husband John, Lisa Sali and her husband Mark, Leigh Ann Whitley and her husband Bryan Nicely, Son Terry Little, Grand Children Connor Little, Mason and Ava Lisella, Duncan and Sullivan Nicely, April, Erica, and Tommy Giordano, Great-Grand Children Aubrie, Sophie, Amara Amelia. The family will have a walk through visitation on Thursday February 11, 2021 from 6:00 p.m. until 7:00 p.m. at Hogg Funeral Home. Masks are required for entry and social distancing will be mandatory due to COVID-19. Services under the direction of Hogg Funeral Home.

Jerry Dean Little, age 78 of Gloucester, died at his home on February 6, 2021, with his family by his side. Jerry joined the US Coast Guard in 1959, entering boot camp in Cape May, New Jersey; following boot camp, he was stationed on the Coast... View Obituary & Service Information

The family of Jerry Dean Little created this Life Tributes page to make it easy to share your memories.

Jerry Dean Little, age 78 of Gloucester, died at his home on...

Send flowers to the Little family.