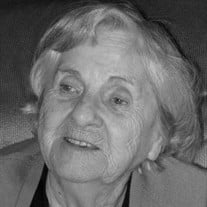 Hayes: Jessie Robb Blystone, 94, passed away April 28, 2017, at Riverside Regional Medical Center, Newport News, VA following a stroke earlier in the week. Jessie was born January 25, 1923, in Dundee, Scotland, the daughter of the late Frederick and Cecilia (Turnbull) Easley. Jessie spent her childhood and school years in Dundee. She served in the British Army (ATS) in an Anti-Aircraft Battery in England during World II. It was there she met and married William (Bill) Blystone, an American serviceman. After being discharged, Bill returned to his home in the Butler Junction area of Freeport, PA in March 1946. Jessie and their infant daughter followed a few months later, arriving in New York City, August 28, 1946 on the War Bride's Ship, the Zebulon Vance. In November 1949 Bill re-enlisted in the Army and the family spent the next 17 years living at various Army posts in the United States and Germany. Jessie and Bill moved to Hayes, VA in 1969 and lived there until their deaths. Jessie was a homemaker, devoted to her family and friends. She enjoyed gardening, loved caring for animals and doing all types of needlework, but most of all, she loved to dance. Her brother, Bill Easley, taught her to dance when she was a teenager and she took every opportunity she could to go out dancing. Later she and her husband Bill enjoyed many years of Scottish Country Dancing, Western Square Dancing and Round Dancing. In addition to her parents, Jessie was preceded in death by her husband, Bill, who passed away in 2013; her brother, William Easley and sister, Ella Tront. She is survived by sons, Fred Blystone and wife Louise Menges of Williamsburg, VA; William Blystone, Jr. and wife Sheree of Hayes, VA and daughter, Paula Lauerman of Dale City, VA; grandchildren, Brian Lauerman of Dale City, VA; Nicole Lauerman and husband Angel Semidey of Dale City, VA; Debi Helseth and husband Glenn of Williamsburg, VA; Paul Blystone and wife Ayumi of Beaverton, OR; David Blystone of Ames, IA; great granddaughter, Ella Short of Dale City, VA; brother-in-law, Robert Blystone of Levittown, PA and many loving nieces and nephews. The family wishes to express special thanks to Tiny Wallace for her loving friendship. Burial will be at Arlington National Cemetery at a later date. Rest peacefully Bonnie Lassie. In memory of Jessie the family desires memorial contributions be given to the Gloucester Mathews Humane Society, P. O. Box 385, Gloucester, VA 23061. Arrangements under the direction of Hogg Funeral Home, Gloucester Point. Please visit www.hoggfh.com to share condolences and memories with the family.

The family of Jessie Robb Blystone created this Life Tributes page to make it easy to share your memories.

Send flowers to the Blystone family.