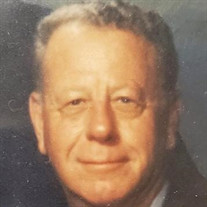 Joe S. Williams, 90, of Portsmouth, Virginia and Ware Neck, Virginia, passed away on August 18, 2021, the conclusion of a long, well lived life. Joe was born in the town of Appalachia, Virginia on May 17, 1931 to Theodore and Patsy Grace Williams, the youngest of four children. He is predeceased by his wife of fifty years, Alice Graham Williams, his parents, his two sisters Peggy Robertson and Nancy Baker, and his brother Bob Williams. Joe grew up in Appalachia and Big Stone Gap, Virginia. It was here he acquired what would be a lifelong love of fly fishing, as well as of the beauty and solitude of the mountains where he would often range for days at a time, camping and fishing along the way. In high school, he played some football, but basketball was his true passion. Despite hailing from a small, rural high school, Joe managed to get a tryout with the University of Kentucky in front of Adolph Rupp. While he didn't make the team, he never forgot Rupp telling him, "Joe, you're a great high school basketball player." Joe always wanted everyone to believe that he didn't like school. This was true, to the extent that he didn't like rules, but Alice always said he read every book in the library and he was a life-long reader. He joined the Air Force and was stationed in Greenville, SC. While in Greenville, he also worked part time as a sportswriter with the Greenville News. During his time in the Air Force, Joe was flown all over the country, going as far as Alaska, and was trained to parachute jump, fracturing his arm on one occasion. He never forgave the Air Force, the state of Alaska, or airplanes for any of this. In 1952, he married his high school sweetheart, Alice Graham, and started a family. Joe said she was "The smartest woman, the nicest person, the prettiest girl, and the best cook,” and his best friend for almost 60 years. She died in 2003 and he missed her every day after that. After leaving the Air Force, Joe and his young family moved to Miami, Florida, where he attended the University of Miami and played basketball. It was also in Miami that Joe began his long career in the automotive industry. His energy and personality made retail a natural fit and he was quickly promoted to sales manager. He became somewhat of a journeyman, dispatched often to help turn around dealerships that were struggling. He was a true student of the business, and purchased the Ford dealership in Portsmouth, Virginia in 1965, when he was only 34. Within two years, he sold Williams Ford and purchased a GM franchise. Together with his partner, William P. Scott, he founded Action Oldsmobile-Cadillac-GMC Trucks Inc., which he would own and operate on High Street in Portsmouth for almost fifty years as one of the highest performing Olds-Cadillac dealerships in America. He was a smart, analytical business person who had a way of cutting through the distractions and staying focused on the problem at hand. He was loyal to a fault and an invaluable mentor to family, friends, and business associates. He didn't mince words or sugarcoat anything. His strong sense of ethics and hard-nosed approach to the business won him many admirers, some detractors, and universal respect. In 1972, Joe and Alice purchased Belleville Farm in Ware Neck, Virginia. Although he didn't truly retire for another forty years, from that time on he would spend as much time as possible "at the farm" with Alice, surrounded by and spoiling rotten as many grandchildren as possible, and re-engaging with his long favorite pastime of fishing. Although he despised boats of all kinds, he was one of the most successful dock anglers of all time, catching a wide and improbable variety of species in the North River without ever leaving dry land. Joe was exceptionally proud of all his children and the families and lives they created. His most enduring role would be as Pappaw to his twelve grandchildren and eleven great-grandchildren for whom he was a source of fierce and unconditional love (or tough love when necessary), support, advice, Coca-Cola, and bait. He had a great sense of humor and an uncanny ability to make you see things his way. He lived an uncommon life of which we were all blessed to be a part, and we will miss him always. We take comfort in knowing that on August 31, he will be with Alice to celebrate their anniversary. He is survived by his children and their spouses, Patricia and Ken Houtz, Katherine and Larry Preddy, Jim and Kim Williams and Peggy and Richard Murphy, his Grandchildren Mac(Megan) Houtz, Matthew(Samantha) Preddy, Ella(Aaron) Ames, Sarah(Joe) Andrews, Mary Alice( Mike) Gardner, Will(Parichat) Houtz, Allison Murphy, Katie Preddy, Rob Williams, Glenn Murphy, Bess(Brian) Toole, Bridget Murphy and 11 great grandchildren; brothers-in-law McKinley Graham and his wife, Rita and Glenn Graham and his wife Joyce as well as many nieces and nephews. A private service will be held at Singleton United Methodist Church. Memorial contributions may be made to Mountain Empire Community College Foundation, 3441 Mountain Empire Road, Big Stone Gap VA 24219, Attn: Alice Graham Williams Memorial Scholarship Fund or the Singleton United Methodist Church Building Fund, PO Box 27, Schley, VA 23154. Services under the direction of Hogg Funeral Home.

Joe S. Williams, 90, of Portsmouth, Virginia and Ware Neck, Virginia, passed away on August 18, 2021, the conclusion of a long, well lived life. Joe was born in the town of Appalachia, Virginia on May 17, 1931 to Theodore and Patsy Grace Williams,... View Obituary & Service Information

The family of Joe S. Williams created this Life Tributes page to make it easy to share your memories.