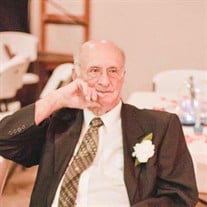 John Javan Adams, Sr., of Gloucester Point, died at his home Saturday, September 21, 2019 while resting peacefully, following a brief illness. Born October 2, 1928, to the late Waller Adams and Sallie Zack in Pennington Gap, VA, he was one of nine children. He joined the U.S. Army in August 1948 at the age of 19 and went on to serve with distinction for the next 30 years. His service duties took him to Korea, the Dominican Republic, Vietnam, the Azores, and Alaska. He finished his duties with the rank of CW4 at Fort Eustis in Newport News, VA. After retiring from active duty in 1979, he moved to Gloucester County, VA, and continued his career of civil service. In 2000, he was elected to serve on the Board of Supervisors, Gloucester Point district. John was a committed Christian and member of his church, where he served as a deacon and enjoyed singing in the choir. Participating in the Courthouse Players and performing with the singing ensemble Tri-County Express was a treasured experience with many friends. Tireless, kind, and generous, he faithfully cared for his family. John was most at home on his riding mower, tending to his garden, or in his favorite chair watching football. He was lucky to have two loves in his life and was the devoted husband of JoElla Richardson Adams, who passed away in January of 1999, and Regina Foor Adams, whom he married in February of 2000. In addition to his wife Regina, he is survived by his children, John J. Adams, Jr., daughter, Teresa Adams Kelley, son William W. Adams (Katy), and step-daughters Cindy Foor Callis (Jack) and Beth Foor Hicks (Rusty). He was "Papaw" to seven grandchildren: Chris Larson, Sara Williams, Meaghan Koehler, Bryan Hicks, Daniel Hicks, Ashley Jo Zepeda, Will Callis, Kaylin Adams, Evan Hicks, and Colby Adams. He had nine great-grandchildren who were the light of his life, as well as two sisters Sally Ann Johnson and Lena Rue Pellman. The family will receive friends Wednesday, September 25, 2019, from 7:00 p.m. until 8:30 p.m. at Hogg Funeral Home. A funeral service conducted by the Reverend Ray Goude, Jr., will be held 11:00 a.m. Thursday at Gloucester Point Baptist Church. Interment with military honors will follow in Rosewell Memorial Garden Cemetery. In memory of our loved one, memorial contributions may be made to Gloucester Point Baptist Church, ATTN: Building Fund, 7741 Terrapin Cove Road, Gloucester Point, VA 23062. Services under the direction of Hogg Funeral Home.

The family of John Javan Adams Sr. created this Life Tributes page to make it easy to share your memories.

Send flowers to the Adams family.