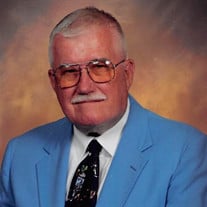 Newport News/Deltaville: John Franklin Hogge, 90, died December 12, 2016 at Morningside Assisted Living of Newport News. Frank was born September 25, 1926 in Perrin, VA to Virginia Pearl and Grover Cleveland Hogge. He enlisted in the U.S. Army, serving from 1944 – 1946 as a Surgical Technician in the Medical Detachment 48th Field Artillery Battalion. His commendations while in the Army include the Asiatic Pacific Theater Service Medal, Good Conduct Medal, Occupation Medal (Japan) and WWII Victory Medal. After the service, Frank was a sheet metal worker at the Newport News Shipyard and did home improvements on the side. In the late 1950s he opened Hogge Home Improvement. As a gifted entertainer and singer, he began performing in military shows, at radio stations, lodge shows and night clubs. He worked for Moore's Quality Building Materials as a contracting salesman for many years and for Parkview Building Supplies. He was the owner of Hogge Hobbies, constructing mailboxes for subdivisions and for retail sales. Frank was a member of the Peninsula Homebuilders Association, participated in the Parade of Homes and volunteered much time and energy to the Peninsula Habitat for Humanity. He was singing at a local benefit when he met Mary Morrissey Fields, owner of Fields Dance Studio and mother of Ernie. Their paths kept crossing at different shows, and eventually he started singing and emceeing her shows. They were married in 1951, and Frank continued to emcee the annual dance recital for the next 25 years. After Mary’s passing, Frank met Ethelanna Sirois Tibert, also involved in the Homebuilders Association, and they were married in 1978 with her children Lauren and Gary in attendance. In 1992 Frank built a home on the Piankatank River in Hartfield where he spent much time on the porch overlooking the river, sipping a scotch and water, chatting with neighbors and listening to his favorite jazz music. He enjoyed feeding the geese and ducks and tinkering in his woodshop. He and Ethelanna loved cats and adopted several over the years. Frank and Ethelanna were wonderful hosts, entertaining family and friends and serving fried oysters and beer shrimp. Frank was a member of Zoar Baptist Church in Deltaville and was part of a breakfast group that met at Damon’s Restaurant. He will be missed by all of those whose lives he touched along the way. He was preceded in death by his parents, his wife Mary Hogge (1975) and his wife Ethelanna Hogge (2015). He is survived by step-children Lauren Tibert Wells (Dan), Gary Tibert and Ernie Fields (Judi); step-granddaughters Lori and Cindi; step-great granddaughters Emily and Sadie, and special family friend Cindy Carter. The family will receive friends from 3:00 until 4:30 p.m. Sunday, December 18, 2016 at Hogg Funeral Home, Gloucester Point. Graveside funeral service officiated by Reverend John Snow will be held 12:00 noon Monday, December 19, 2016 at Gloucester Point Cemetery. Friends are asked to assemble at the cemetery. The family desires contributions may be made In Frank’s memory to the Habitat for Humanity PGW, P. O. Box 1443, Newport News, VA 23601. Family and friends may share condolences and memories at www.hoggfh.com

The family of John Franklin Hogge created this Life Tributes page to make it easy to share your memories.