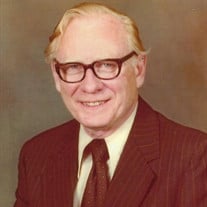 John Francis Kuemmerle (Jack) formerly of Gloucester passed away on March 14, 2020 in Richmond, Virginia. He was the son of Charles Gottlieb Kuemmerle and Elizabeth Straub born in Philadelphia Pennsylvania on September 28, 1925. He is survived by his wife, of 68 years, Mrs. Pearl Snowden Kuemmerle, daughter Mrs. Melanie Sue White and Mr. Errol Henry White, son Dr. John Francis Kuemmerle Jr., and Mrs. Ashley Kuemmerle. Also, grandchildren Dr. Lauren Snowden Thompson White and Ryan Cantrell Thompson, Carl Henry White, John Francis Kuemmerle III (Trip), William Jack Kuemmerle, Parker McLin Kuemmerle, and Caroline Elizabeth Kuemmerle. Jack graduated from Northeast High School in Philadelphia, received his BA in Economics from the College of William and Mary in 1950, MBA from the University of Maryland in 1956, and studied graduate work at University of Minnesota. He served as a Radioman 3rd Class in the Asiatic Pacific Theater during World War II on the Naval Ship USS Seneca. He was a long-time member and Vestry member at Ware Episcopal Church in Gloucester, Virginia, a life-time Masonic member of Glen Bernie Lodge No. 213 A. F.& A. M. in Maryland. He was a member of The Scottish Rite (32nd degree), Tidewater Shrine Club and a proud member of the NU chapter of Kappa Sigma fraternity. Jack developed matrix management for the Pillsbury Company, later became the Senior Vice President of Administration and Regionalization at the Guardian Life Insurance Company of America in New York. While in New York, Jack was an adjunct assistant professor at Columbia University. In later years Jack was Director and part owner of Brinker Capital. Jack was an “Emeritus Trustee” of the College of William and Mary, and founder and trustee of The Caroline McCoy Jones Private Foundation. Above all, Jack treasured his family. He will be remembered for his hard work, loyalty to his old friends (especially the Gloucester Men’s Poker Club), his devotion to the Episcopal Church, and the love of tradition & appreciation for his country. He embodied the kindness, greatness, sacrifice, and great strength of his “Greatest Generation.” Services will be private – arrangements by Hogg Funeral Home.

John Francis Kuemmerle (Jack) formerly of Gloucester passed away on March 14, 2020 in Richmond, Virginia. He was the son of Charles Gottlieb Kuemmerle and Elizabeth Straub born in Philadelphia Pennsylvania on September 28, 1925. He is survived... View Obituary & Service Information

The family of John "Jack" Francis Kuemmerle created this Life Tributes page to make it easy to share your memories.

Send flowers to the Kuemmerle family.