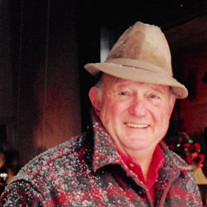 Gloucester, VA: John A. Jaquysh passed away peacefully in his home on August 6 with his family by his side. John was born in Dierks, Arkansas, September 1932. He was the seventh child born to Mary Ethyl Thomas and Henry Jaquysh. The family relocated to Broken Bow, Oklahoma where he was raised. He continued his schooling at Shasta College, California, earning an AA Degree. John is a 55 year retired member of the Operating Engineers, Local 3, San Francisco. As a heavy equipment operator, he worked on tunnels, dam, bridges and high rises. Just to name a few, Bay Area Rapid Transit, Embarcadero Center and underground municipal transportation system in the SF Bay area. He then moved to the business office as dispatcher for several years. Upon his retirement from Local 3, John was a Business Representative in San Mateo County. John met his wife, Neva Wellman, during bowling tournaments. They were married in Reno, Nevada May 1970. To this union, a son, Jay was born in San Francisco in July 1971. John and Neva retired to Sandpoint, Idaho and lived there for 15 years. One of his leisurely activities was boating on Lake Pend Oreille. As a member of the Coast Guard Auxiliary many good times were shared with those members and their families. John also enjoyed woodworking and was very handy fixing just about anything. John and Neva took many road trips, traveling thousands of miles of beautiful landmarks and scenery in 49 states. They had many memorable trips of visiting their children and grandchildren along the way. John is survived by his wife, Neva; son, Jay and daughter-in-law, Jeannette and their three sons, Cody, Dylan and Riley of Gloucester. He is also survived by his niece, Nancy Griggs Lane of Broken Bow. From a previous marriage, John is survived by daughters, Roberta Dallimonti of Watsonville and Carmen Boss of Cottonwood; sons, Paul of Brookings, Oregon, Steve of Granby, Colorado and Jeffery of Shasta Lake City, California. There will be no services. Memorial donations may be made to Gloucester Volunteer Fire and Rescue, P. O. Box 1417, Gloucester, VA 23061. Arrangements under the direction of Hogg Funeral Home and Crematory, Gloucester Point. Please visit www.hoggfh.com to share condolences and memories with the family.

Gloucester, VA: John A. Jaquysh passed away peacefully in his home on August 6 with his family by his side. John was born in Dierks, Arkansas, September 1932. He was the seventh child born to Mary Ethyl Thomas and Henry Jaquysh. The family relocated... View Obituary & Service Information

The family of John A. Jaquysh created this Life Tributes page to make it easy to share your memories.

Gloucester, VA: John A. Jaquysh passed away peacefully in his...

Send flowers to the Jaquysh family.