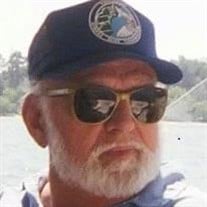 Hayes: John Irvin Lawson, Sr., died March 29, 2018. He was 94 years old. Although John was born in Washington D.C. and grew up in Arlington VA, he had roots in Bena. He treasured his memories of time spent at the family home on the Perrin River with his sister Betty and brothers Barnes and Donald and returned to the area when he retired. He served in the US Army Air Corp. during World War II where he met his future wife Marjorie Stevens who was also in the service in the Navy WAVES. For many years John owned his own business, Lawson Construction Co., and built many luxurious homes in Northern VA. He loved good food, dancing and socializing with family and friends. You could always count on John to be on his patio with his martini (mostly water) at 5 o’clock. He was an avid boater and loved fishing. You could see his boat, the Yknot, up and down the York River, the Chesapeake Bay and the Intracoastal Waterway. Marge always said he knew the water like the back of his hand, never needing to read a chart. He was also a proud graduate of the University of Virginia and a devoted basketball and football fan. Go Cavaliers! He leaves behind his son, John (Marilynn), daughters Julie George (Steve) and Sandie Wharen (Bob) as well as his granddaughters Cheri Lambert (Bryan) and Angie Weston. He has two great grandchildren, Rachel Lambert and Andrew Weston. His wife of 64 years, Marjorie Stevens Lawson predeceased him in 2011. His family would like to especially thank all of John’s friends in Dockside including his wonderful neighbors in Building 8, his closest friend Roy Hinton and his kind care giver Debby Wiggins. We appreciate the friendship and kindness you have shown him. Services will be held Saturday, May 12 at 11:00 a.m. at Abingdon Episcopal Church, 4645 George Washington Memorial Hwy. There will be an inurnment at Arlington Cemetery at a later date. If you wish to create a memory in John’s name, pay forward an act of kindness. Arrangements under the direction of Hogg Funeral Home and Crematory, Gloucester Point. Please visit www.hoggfh.com to share condolences and memories.

Hayes: John Irvin Lawson, Sr., died March 29, 2018. He was 94 years old. Although John was born in Washington D.C. and grew up in Arlington VA, he had roots in Bena. He treasured his memories of time spent at the family home on the Perrin River... View Obituary & Service Information

The family of John I. Lawson Sr. created this Life Tributes page to make it easy to share your memories.

Send flowers to the Lawson family.