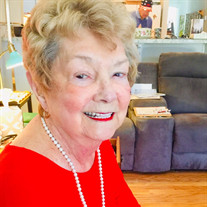 June Young of Hayes, passed away on October 13, 2020 as a result of natural causes at Riverside Walter Reed Hospital. Her husband, Roger Havens Young, was holding her hand. June was 85 years old. She was the eldest of seven children of Elzie... View Obituary & Service Information

The family of June Young created this Life Tributes page to make it easy to share your memories.

Send flowers to the Young family.