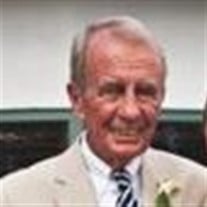 Hayes: Lawrence “Larry” Hurst, 76, of Hayes, VA went to his heavenly home April 25, 2017. Larry was born on December 16, 1940 in Greensboro, NC. Larry received his college degree from Atlantic Christian College in Wilson, NC. He worked for Sears, Roebuck & Company in NC, where he had met the love of his life, Liz. He retired after 27 years of service in sales and management. Larry and Liz then moved to Hayes, VA to open and operate a Western Auto together, until he went into car sales at Suttle Motor Corporation in Newport News, VA, where he retired after 17 years. Larry had an infectious smile and laugh that was enjoyed by many. His fun-loving personality was the source of many of his practical jokes. Larry was an avid beach lover where he spent most of his free time. He enjoyed camping with his family at Sandbridge, VA. He also enjoyed boating and fishing throughout his time in NC and VA. Larry was an active member and deacon of Providence Baptist Church. He was a man of high values and great faith. He loved the Lord with his heart, soul, and mind. Larry was preceded in death by his father, Lawrence Howard Hurst and his mother, Frances Brittain Hurst. He is survived by his wife of 31 years, Elizabeth (Liz) Hurst; his children, Tish Halle (Steve), Brad Hurst (Betsy), Scott Crocker, and Ashley Hollins (Daniel); eight grandchildren, Taylor, Evan, Anthony, Ryan, Lauralee, Austin, Mary Kate, and soon to arrive, Peyton Elizabeth; and his sister, Janice Jayroe (Don). A service to celebrate the life of Larry Hurst will be held at 2:00 PM on Sunday, April 30, 2017 at Providence Baptist Church, Hayes, VA. Arrangements under the direction of Hogg Funeral Home and Crematory, Gloucester Point. Please visit www.hoggfh.com to share condolences and memories with the family.

The family of Lawrence "Larry" Hurst created this Life Tributes page to make it easy to share your memories.

Send flowers to the Hurst family.