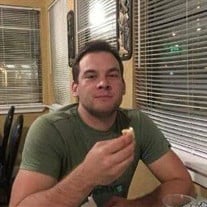 It is with great sadness that the family of Luke Thomas Piecuch announce his passing. Luke was born in Puyallup, WA February 14, 1987 and passed away June 12, 2018 in Jacksonville, Fl. at the age of 31. Luke was a compassionate, adventurous and loving father, son, husband, and brother. He grew up in Poulsbo and attended North Kitsap HS then moved to Puyallup where he graduated from Puyallup HS in 2005. Luke joined the US Navy during high school. His service was deferred until graduation upon which he immediately went into service. He served two terms as a helicopter mechanic with the HSC 84-Red Wolves and HM 14-Blackhawks and had five tours of duty to Iraq and Bahrain. Luke was honorably discharged in 2014. Luke married Christina Huch on August 4, 2010 and together they had four children. In 2014, Luke and the family moved to Puyallup, then in 2018 to Hayes, Virginia where Luke returned to school and was in the middle of following his lifelong dream of becoming a commercial deep sea diver when he unexpectedly passed, leaving a void in the hearts of all who knew and loved him, including his wife Christina, sons Nathaniel (Kenton), Christian and Joseph and daughter Arya; mother Mary Piecuch of Port Orchard, father Tim Piecuch of Poulsbo, sisters Rebekah (Nick) Bunker of Orting, Elizabeth Rodriquez of Port Orchard, Ashley Gregg of Bremerton and brother John Piecuch of Port Orchard, grandmother Wilma (Orlean) Yeaw of Puyallup, and many relatives and friends throughout the area and across the country. Luke will be laid to rest at the Albert G. Horton Jr. Memorial Veteran’s Cemetery in Suffolk, VA with full military honors, Friday, June 22, 2018 at 12 noon. Family and friends will assemble at the cemetery. Luke had a kind spirit, a mischievous and fun-loving nature, and a contagious smile. He loved his wife, his children, his family and friends beyond measure. Luke passed while following his lifelong dream. He was at a good place in his life and he was happy. He was loved dearly.

It is with great sadness that the family of Luke Thomas Piecuch announce his passing. Luke was born in Puyallup, WA February 14, 1987 and passed away June 12, 2018 in Jacksonville, Fl. at the age of 31. Luke was a compassionate, adventurous... View Obituary & Service Information

The family of Luke Thomas Piecuch created this Life Tributes page to make it easy to share your memories.

It is with great sadness that the family of Luke Thomas Piecuch...

Send flowers to the Piecuch family.