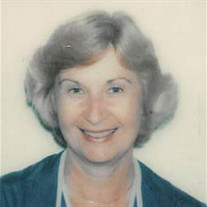 Hayes: Margaret “Peggy” Wood Doyle passed away peacefully on July 29, 2018, beloved wife of 66 years of Captain Thomas Doyle USN (Ret). Peggy was born in New York City and attended the prestigious Hunter College, trained as a teacher and licensed in New York State. Well known for her many charitable works, Peggy volunteered at hospitals, for Meals-on-Wheels, with Hospice, and taught English as a second language to newly arrived immigrants. As a member of the York River Circle of The King’s Daughters and Sons, Peggy was the architect of their annual Book/Author Luncheon for twenty years and was a past President and Treasurer of the Chesapeake Bay Writers. She was the mother of 7 children and is survived by her husband, Tom; sons Tom Doyle, Michael Doyle, Jim Doyle, and Mark Doyle; and daughters Gina Benere, Cecilia Rennix, and Sarah Thomas; 26 grandchildren and 16 great-grandchildren. A dedicated wife, she accompanied her husband during twenty-seven years of active Naval Service living in many states, residing in Hawaii for the longest period. Upon his separation from the Navy, she traveled with her husband to the Kingdom of Saudi Arabia where they resided for three and a half years, finally retiring to Gloucester County, VA in 1985. The family will receive friends Tuesday, July 31, 2018, from 6:00 until 7:30 p.m. at Hogg Funeral Home, 3098 George Washington Memorial Hwy, Hayes, VA. A funeral mass officiated by Reverend James Cowles will be held 11 a.m. at the Church of St. Therese, Gloucester, VA on August 1, 2018. In memory of Peggy, and in lieu of flowers please consider a donation to the Southeastern chapter of the Alzheimer’s Association, 6350 Center Drive, Suite 102, Norfolk, VA 23502. Please visit www.hoggfh.com to share condolences and memories.

The family of Margaret Wood "Peggy" Doyle created this Life Tributes page to make it easy to share your memories.

Send flowers to the Doyle family.