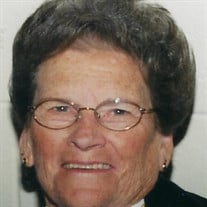 Marian Virginia Williams West, 89 entered into her heavenly home and into the arms of her Savior on August 25, 2019. She was born on December 6, 1929, the first of three children of Clarence and Hazel Williams of Maundy’s Creek. Marian often shared happy memories of growing up in Guinea and attending school with many long-time friends. She was a member of Union Baptist Church being baptized on July 17, 2005. At the time of her passing, she was a resident of the Gloucester House. There she enjoyed a casual lifestyle reacquainting with old friends and making new ones. She was known for her love of sweets, especially blueberry muffins and butterscotch candy. She looked forward to sharing monthly Wednesday night suppers with loved ones. Our heartfelt appreciation to the entire Gloucester House staff for their kind, loving and compassionate care of “Miss Marian.” You all are genuinely Gods Angels. She is reunited in heaven with her parents, her son Scott West, granddaughter Theresa Jenkins, sister, Bernice Hall and brother Clarence Williams, Jr. She is survived by a daughter Rosa Goff (Lane), sons Earnest R. West, Jr., and Ronnie West (Viola), grandchildren, Tina, Kimberly, Heather, Daniel, Keith, Erica, and Allison as well as many extended family members. A graveside service conducted by the Reverend Richard Whiteheart will be held 2:00 p.m. Wednesday August 28, 2019 in Rosewell Memorial Garden Cemetery. The family will receive friends from 1:00 until 1:45 p.m. before the service at Hogg Funeral Home. In memory of Miss Marian, memorial contributions may be made to Union Baptist Church Attn: Snack pack Program, 9254 Guinea Road, Hayes, VA 23072. Services under the direction of Hogg Funeral Home.

Marian Virginia Williams West, 89 entered into her heavenly home and into the arms of her Savior on August 25, 2019. She was born on December 6, 1929, the first of three children of Clarence and Hazel Williams of Maundy&#8217;s Creek. Marian... View Obituary & Service Information

The family of Marian Williams West created this Life Tributes page to make it easy to share your memories.