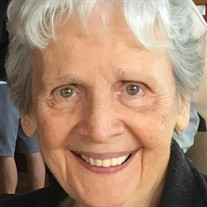 Marie Magdeline Zebron Perecko – “Nanny” peacefully passed in Gloucester, of natural causes on September 27, 2019, a week before her 91st birthday. She was born in Baltimore, MD, on October 3, 1928, to Sarah Elizabeth Boyer and John Zebron. She married the love of her life (Paul John Perecko of Monongahela, PA) on August 10, 1949, and traveled across the globe having eight children as an Army Officer’s wife. Upon Paul’s death in 1967, she spent the remainder of her life in Newport News and Gloucester, VA – raising her eight children on her own (all of which graduated from the same Denbigh High School). Aside from her full-time parenting, Marie began driving a school bus until completing her GED and LPN program at Thomas Nelson Community College. She then worked at Riverside Hospital as a Labor & Delivery nurse. Marie loved creating things. She enjoyed cooking, sewing, crocheting, ceramics, macramé, and gardening. She loved camping and long road trips along the East Coast, visiting family and amusement parks with her children. Marie’s strong faith in God and support from dear friends at Saint Jerome’s Catholic Church gave her strength and guidance in the difficult task of being a single parent. Through the years, those who’ve known Marie were blessed with her determination, commitment, and sense of humor. She is preceded in death by 3 of her four siblings: Margaret, AnaMae, and Edna Zebron; 2 of her eight children: John and Robert Perecko; Marie is survived by her children: Steve (Diane) Perecko, Paula (Larry) Staupe, Larry (Christy) Perecko, Mike (Rebecca) Perecko, Theresa (Scott) Duncan, Ruth (Mark) Barnhardt, her deceased son’s loving wives: Allison and Margaret; and her 93-year-old sister, Audrey Good. Marie is no longer with us, but her gift to this world is a resulting 1,196 life-years, as lived by her eight children, seventeen grandchildren, and fourteen great-grandchildren…with more on the way! God bless her and her many loved ones as we mourn her loss. The family will host visitation at Hogg Funeral Home, from 7 to 8:30 pm on Wednesday, October 2, 2019. A Roman Catholic Mass of Christian Burial conducted by Father Gregory Kandt will be held at noon on Thursday, October 3, 2019, at St. Therese Catholic Church, Main Street in Gloucester. Interment will follow in Parklawn Memorial Cemetery, Hampton at 3:00 pm. In memory of our loved one, please make a donation to St. Jude Children’s Hospital, PO Box 50, Memphis, TN 38101.

The family of Marie Zebron Perecko created this Life Tributes page to make it easy to share your memories.

Send flowers to the Perecko family.