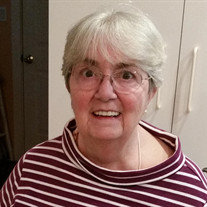 Gloucester Point: Mary Ann Leary ‘Molly’ Boon, 76, passed away on June 11, 2018, at her home in Gloucester Point, Virginia, following a protracted illness. Born in Springfield, Massachusetts, the daughter of the late James Francis and Catherine Germain Leary, she attended Cathedral High School and later graduated from ELMS College in Chicopee, Massachusetts, to begin her love of teaching, first to elementary school students in Springfield and later to pre-school students at the Grace Episcopal Day School in Yorktown, Virginia. After retiring from teaching, she opened the Deja Vu consignment store on Main Street in Gloucester Village with fellow retired teacher and business partner, Virginia K. Lynch. A life-long Democrat, Molly took great pride in her civic duties, including grand jury service. In addition, she served for more than nineteen years as the first female appointed to the Gloucester Social Services Board. She also served as a volunteer with the Gloucester-Mathews Free Clinic. She made a positive difference in the lives of many of Gloucester’s citizens, particularly those most vulnerable to the social problems within our society. Molly was predeceased by her son Matthew Leary Boon. She is survived by her husband of 52 years, Dr. John D. Boon, III, of Gloucester Point, her son and daughter-in-law, Drs. John D. Boon, IV and Catherine Clayton Boon, of Gainesville, Florida, and her two grand-daughters, Mary Ashton Boon and Sarah Elizabeth Boon. She is further survived by seven of her nine brothers and sisters and many nieces and nephews. The family would like to thank the wonderfully supportive CNA’s who devotedly cared for Molly with special thanks to “Molly’s Buddies”, a group of extraordinary women who continued to support Molly and John through visits, meals, and outings; and the supportive and dedicated staff of the Riverside Walter Reed Hospice Program, 7358 Main St, Gloucester, VA 23061. Donations in Molly’s memory may be made to either the Hospice Program or the Gloucester-Mathews Free Clinic, P. O. Box 385, Gloucester, VA 23061. The family will receive friends from 5 until 7 p.m. Saturday, June 16, 2018, at Hogg Funeral Home, Gloucester Point. A celebration of Molly’s life is planned at a later date. Arrangements are under the direction of Hogg Funeral Home and Crematory, Gloucester Point. Please visit www.hoggfh.com to share condolences and memories.

The family of Mary Ann Leary Boon created this Life Tributes page to make it easy to share your memories.

Send flowers to the Boon family.