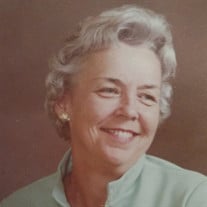 Gloucester: Norma B. Friesen, 92 on June 18, passed at Riverside Walter Reed Hospital in Gloucester Courthouse, VA on Friday morning, June 9, 2017. Born Norma Leona Barnes in Drew, MS on June 18, 1925, she grew up in Greenwood, MS, attended Milsaps College in Jackson, MS, and graduated as Salutatorian from Louisiana State University with a double major in Mathematics and English. Norma, along with her husband Will, who passed in 2009, were early members of Wesley United Methodist Church, in Hampton, VA from 1966 until his death. She was a Girl Scout Leader, Election Official, and worked many seasons as a Tax Statement Preparer in the community. She loved bird songs, camping, weekends and summers at her cabin on the Ware River, and played an excellent game of Bridge. Norma is survived by her children, Linda M. Friesen and Fritz B. Friesen; her caregivers of 5 years, Dee and Ronny Morgan; our dear friend, Jim Bowen; grandchildren, Jackie, Michael, John, Candi, and Kayleigh; and great grandchildren, Jayden, Bella, Zoey, Everly, and Leo. The family desires for donations made in Mrs Friesen’s name be given to Wesley United Methodist Church, 2510 N. Arminstead Avenue, Hampton, VA 23666, designated to the H.E.L.P. program. Greatlyloved and missed by all who knew her, she will live on in our hearts until we are together again. Arrangements under the direction of Hogg Funeral Home and Crematory, Gloucester Point. Please visit www.hoggfh.com to share condolences and memories with the family.

The family of Norma Barnes Friesen created this Life Tributes page to make it easy to share your memories.

Send flowers to the Friesen family.