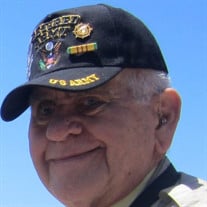 Phillip J. Barker, 80, of Gloucester, passed away March 23, 2019. Phil was born on November 15, 1938, in Myrtle Point, OR. He was the third of six children born to Joel L. Barker and Viola Hoffman Barker Banhart. Phil attended Grants Pass High School in OR, where he was a champion heavyweight wrestler and president of the Knucklebusters, an auto mechanic club. Phil served in the United States Army for 20 years as a helicopter mechanic, received a degree in accounting from Hampton University, retired from the Army as a captain, studied laundry and linen management, and worked as a civilian for the Armed Forces at Lajes Field, Azores, Portugal; Reese Air Force Base, Texas; and Fort Polk, LA. Soon after Phil graduated from Officer Candidate School, Transportation Corps, at Fort Eustis, VA, he met the love of his life, Margaret Ann Ledford, on a blind date. They married in Hawaii in June 1968, while Phil was on R&R from Vietnam. They raised four children (David, Terri, Brian, and Lisa) in Newport News, VA; King and Queen Courthouse, VA; Crofton, MD; and Terceira Island, Azores. Phil and Margaret then lived in TX, LA, and OR before returning to VA in 2015. Phil enjoyed cats, dogs, bald eagles, cinnamon rolls, building things, bad jokes, and a good buffet. Sweet and funny, he was a loving husband, father, grandfather, great-grandfather, brother, uncle, and friend. He is preceded in death by his wife of 47 years, Margaret Ann Barker of VA, and his sister, Linda Mauldin of OR. He is survived by son, David Barker of OR, and granddaughter, Jenifer Travers of VA; daughter, Terri Blankenship, and grandson, Noah Blankenship, of VA; son, Brian Barker of OR; daughter, Lisa Barker, son-in-law, Curt Cronister, grandson, Cal Barker, and granddaughter, Maisy Barker, of MD; brother, Richard Barker, and sister-in-law, Ginny Barker, of MD; brother, Keith Barker, and sister-in-law, Ruth Barker, of OR; sisters, Karen Shipman of CA and Dianne Lorber of OR; and many great-grandchildren, nieces, and nephews. The family would like to thank the staff at Heron Cove at Sanders and Visiting Angels of the Northern Neck and Middle Peninsula, VA, for their loving care and support. A memorial for family and close friends to celebrate Phil’s life will be held at a later date. Memorial contributions may be made to the Disabled American Veterans or the Gloucester-Mathews Humane Society.

The family of Phillip J. Barker created this Life Tributes page to make it easy to share your memories.

Send flowers to the Barker family.