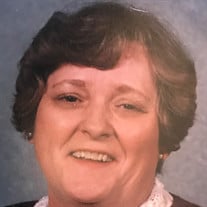 Priscilla Hogge left us to join husband Claiborne on October 20, 2018, at home, surrounded by family and friends. Born Priscilla Frazee Cushman on January 9, 1945, to Thomas and Margaret Cushman, she grew up at The Carousel on the York River and attended Botetourt and Gloucester High School. From the age of five, she sang and played ukulele for friends and family, and loved music throughout her life. She sang in the Ware Church Junior Choir under the auspices of Reverend Reginald Wells Eastman. Growing up on the York River, she was in and out of family cottages Two Bobs and Echo Hall and loved boating, fishing, crabbing, and all water activities. In 1963, she and Claiborne married and first lived in a tiny house behind Wards Store. After having Wendy, they lived in the Little House where Clay was born, and they made life-long friends. Priscilla and Claiborne loved square dancing and bridge parties and frequently took the family camping at Lake Gaston. Priscilla worked for her father at Thomas Cushman Real Estate as well as after Claiborne took it over in 1975, and it became E. Claiborne Hogge Real Estate. They moved to Glen Roy and had many adventures on the Ware River and Mobjack Bay, particularly on The African Queen and The Prissy Wen. They sponsored sports teams for local children and were instrumental in real estate and economic development in Gloucester County. Later, at River Hall on the North River, they held many gatherings for family, friends, and the community, and continued after moving next door to Ups and Downs. Well-known for their commitment to the County, their presence was key to the success of Gloucester social and business events. Much beloved by neighbors, family, and friends, Priscilla thrived on the company of the young people in Gloucester, who were all drawn to her sense of fun. Along with childhood friends Judy (Thrift) Ward, Brenda (Hall) Kirschbaum, and Pammy (White) Hall, Priscilla served the community through the Ware Junior Women’s Club, the Ladies’ Auxiliary of the Gloucester Volunteer Fire Department, and the Ware River Circle of King’s Daughters. Priscilla was also active in the Sunday school program at Ware Church. Priscilla is survived by her daughter Winifer (Wendy) F. Hogge and her husband Frank C. Driver, son E. Claiborne (Clay) Hogge, Jr.; sister Margaret Teagle and husband David; sisters and brothers in law, Debra and Willie Spencer, Janet and Larry Johnson, and Bessie Hogge; unofficial adopted grandson Ryan Haywood; her grand dog Lulu Belle Hogge-Driver; twelve nieces and nephews; and special caregivers April Eller, Karina Arntz, Ashley Robinson, Diana Shackelford, Janie Marshall, Dorthy Shockley, and Brandi Waltman. She was preceded in death by husband Claiborne, Sister Mary Cushman Kimberly, and both parents. Funeral services, conducted by the Reverend Grant Ambrose, will be held 11:00 am Wednesday, October 24, 2018, at Ware Episcopal Church. Interment will follow in the church cemetery with a reception to follow in Ware Parish Hall. Memorial contributions can be made to Ware Church, the Eastman Educational Scholarship PO Box 616, Gloucester, VA 23061, Bread for Life Food Pantry, “Bread for Life” 6262 Main St., Gloucester VA 23061 or Gloucester Volunteer Fire and Rescue, PO Box 1417, Gloucester, VA 23061 Services under the direction of Hogg Funeral Home.

Priscilla Hogge left us to join husband Claiborne on October 20, 2018, at home, surrounded by family and friends. Born Priscilla Frazee Cushman on January 9, 1945, to Thomas and Margaret Cushman, she grew up at The Carousel on the York River... View Obituary & Service Information

The family of Priscilla Cushman Hogge created this Life Tributes page to make it easy to share your memories.

Priscilla Hogge left us to join husband Claiborne on October...