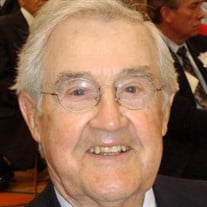 Richard S. Russell, 97, of Kilmarnock, VA, passed away January 28, 2021. Born May 9, 1923 in Ottoman, VA, on White Hall Farm, he was the son of the late William Benjamin Russell and Eleasure Belfield Russell Conrad. He is survived by a daughter, Valeri R. Helterbran and her husband, Robert, of Fort Myers, FL; a son, Richard S. Russell, Jr. of Kilmarnock; three grandsons, Robert Helterbran III, Benjamin Helterbran, and Richard S. Russell III; two brothers, Milton Conrad and Cleveland Conrad of Mollusk, VA, and their children and grandchildren. In addition to his parents, he was preceded in death by his wife, Anne Haydon Russell, brothers, Raymond Russell, Emerson Russell, and Edward Russell, and sisters Elsie Russell Haynie and Shirley Conrad Heim; he is survived by their children and grandchildren. Special appreciation is extended to his great nephew, Tommy Russell, who was a great help to him in so many ways. Mr. Russell graduated from Lively High School in 1943 and served in the U. S. Navy on the USS Arkansas as an aviation mechanic (AMMIIC) in the Atlantic and Pacific theaters during World War II. He also served on anchor detail at Normandy during D-Day. Mr. Russell began working for Rannie Haydon at Haydon Pontiac in Kilmarnock in 1948, marrying the owner's daughter in 1949. He purchased the dealership in 1964 from his father-in-law and moved its location to north of Kilmarnock in 1980. He retired in 1990 from Russell Pontiac-GMC as dealer and co-owner with his late wife. Mr. Russell was a member of Kilmarnock Baptist Church, Lancaster County Lions Club and Indian Creek Yacht and Country Club. He enjoyed the natural world, baseball, and boating. A graveside service and interment will be held in Kilmarnock at a later date. Memorial contributions may be made to the Animal Welfare League of the Northern Neck or the Lancaster County Lions Club.

Richard S. Russell, 97, of Kilmarnock, VA, passed away January 28, 2021. Born May 9, 1923 in Ottoman, VA, on White Hall Farm, he was the son of the late William Benjamin Russell and Eleasure Belfield Russell Conrad. He is survived by a daughter,... View Obituary & Service Information

The family of Richard S. Russell Sr. created this Life Tributes page to make it easy to share your memories.

Send flowers to the Russell family.