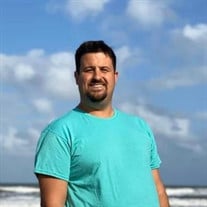 Robert Joseph Cramer passed away unexpectedly at his home in Florida on June 8, 2020. He was 35 years old. Robert was born on July 13, 1984 in Hagerstown, Maryland. He graduated Christopher Newport University with a Bachelor’s Degree in History. A bright light to all who knew him, Robert proudly served in the United States Marine Corps before marrying his best friend, Elizabeth Cramer. Over the next 13 years, they created a beautiful life of service and 3 beautiful daughters, Mary Elizabeth, Caroline Eva and Anna Marie. Robert’s most significant achievement in his life was being a proud father to his 3 girls. He was preceded in death by his father, Richard Michael Cramer, grandparents, Minn Cramer, Mr. and Mrs. Sutphin. In addition to his beloved wife and children, he is survived by his mother, Mary Keith Cramer, brothers, John Cramer (Leslie), Luke Herrman, paternal grandfather, John Cramer, in-laws, Joseph and Mary Williams, brother-in-law, Joseph Williams, Jr. (Ciara), sister-in-law, Kristie Lasseter, nephews, Kaleb, Joseph, nieces, Scarlet, Magnolia, aunt, Sandy Cramer, uncle, Lin Sutphin (Jackie) and his stepfather Bo Herrman. The family will receive friends at Hogg Funeral Home on Tuesday June 16, 2020 from 5:00 p.m. until 6:30 p.m. Due to COVID-19 restrictions and guidelines, masks are required for the visitation and graveside services with military honors will be private. In memory of Robert Joseph Cramer, an educational fund has been established for his daughters at www.gofundme.com/f/caring-for-the-cramers Services under the direction of Hogg Funeral Home.

Robert Joseph Cramer passed away unexpectedly at his home in Florida on June 8, 2020. He was 35 years old. Robert was born on July 13, 1984 in Hagerstown, Maryland. He graduated Christopher Newport University with a Bachelor&#8217;s Degree in... View Obituary & Service Information

The family of Robert Joseph Cramer created this Life Tributes page to make it easy to share your memories.

Robert Joseph Cramer passed away unexpectedly at his home in...

Send flowers to the Cramer family.