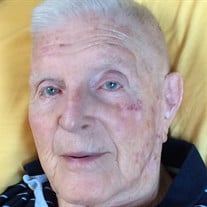 Gloucester: Robert Floyd Decker, 100, beloved husband and father, passed away peacefully on Monday, September 11, 2017 at home surrounded by his children and caregiver. He is preceded in death by his loving wife of 74 years, Helen Cutler Williams Decker of Lake Placid, NY, and sisters, Shirley Decker Klimek of Albany, NY and Doris Decker Marshall of Martinsville, VA. He is survived by his three children, Robert A. Decker (Sue) of Richmond, Susan G. Decker and James E. Decker of Gloucester, six grandchildren and nine great-grandchildren. The oldest of three children, he grew up in Middletown, NY, an excellent student who enjoyed Boy Scouting, achieving the rank of Eagle Scout. While still in elementary school he built several balsa wood gliders for which he received first place awards for unique design and long distance. A graduate of the New York State Teachers College at Albany, NY, he earned an AB Science and Math in 1934, and taught Science, Physics, Chemistry and Biology in New York State after graduation. He also earned a commercial multiengine pilots license. Bob married his college sweetheart Helen in 1941, residing in Boston during WWII, later moving to Falls Church, VA where he raised his family. He served his country as a Commander in the U.S. Navy for 20 years including service during WWII, having served in Boston, Newfoundland, and Hawaii. He moved to Gloucester in 1981, upon retirement after 30 years of service at the U.S. Department of Transportation Federal Aviation Administration in Washington D.C. where he was employed as a systems engineer. A major accomplishment during his professional career was Senior Project Engineer for the installation of and computerization of the National Weather Reporting Network for the FAA culminating his career as Section and Branch Chief. He moved to Gloucester in 1981, purchasing a home on the Piankatank River where he pursued his passion for the emerging home computing industry, initially building his own computers and also enjoyed the challenges of programming and computer graphics. Over the years he produced countless personalized mementos and photo montage creations for every family member. He also enjoyed recreational sailing and boating as well as being a master of our home fix-it needs. The family would like to express a special Thank You to the staff of Grace Hospice of Williamsburg, notably RN Patty Fischer, Dave Heffner, Hospice Volunteer, and in-home caregivers, Cheryl Wallisch, Dana Davis, Sheena Wells and Christina Roane who provided many hours of dedicated care. The family will be pleased to receive family and friends at a memorial gathering and life celebration for Robert and Helen at Hogg Funeral Home, Gloucester Point, Saturday, September 30, 2017, with visitation from 1:30 to 2:00 p.m. followed by the service at 2 p.m. Please visit www.hoggfh.com to share condolences and memories with the family.

Gloucester: Robert Floyd Decker, 100, beloved husband and father, passed away peacefully on Monday, September 11, 2017 at home surrounded by his children and caregiver. He is preceded in death by his loving wife of 74 years, Helen Cutler Williams... View Obituary & Service Information

The family of Robert Floyd Decker created this Life Tributes page to make it easy to share your memories.

Send flowers to the Decker family.