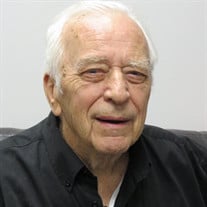 Dr. Robert Harry Harder, son of the late James A Harder and Eleanor Lorang, passed away January 29, 2018, after a brief illness from a stroke. Family and friends surrounded him at the time of his death. Dr. Harder was born August 21, 1934, in Chicago, IL. Dr. Harder went to school at Leyden high school, then studied and graduated from Montana Tech School of Mines, receiving his engineering degree and the Catholic University of America in Washington DC for his law degree. In 1977 Robert H. Harder And Associates, Inc. (H&H Associates) was incorporated. The primary service and business were consulting and engineering to the U.S. Army and U S. Coast Guard as well as commercial clients. The services included engineering and testing on a range of devices from Hand Held Mine Detectors to Water Purification units. In 1987 in response to an inquiry from the U. S. Marine Corps, H&H began work with WATER-JEL Inc., of Carlstadt, N.J. to develop a burn dressing that would extinguish burning white phosphorous significant cause of injuries in the combat zone. H&H was also the prime contractor to the FAA for design, manufacture, installation, and maintenance of a new, real-time weather system, the Airport Weather Information System (AWIS). In 1992, in response to a need for a new combat compression bandage to replace those of 1950 vintage, H&H established an engineering and manufacturing center in Alexandria, VA. In 1993, H&H manufactured the new Combat Dressing, CINCH TIGHT, which was issued a U.S. Patent in 1998. H&H also developed a non-toxic instant cold compress, DUAL ICE, and a vacuum compressed rolled gauze. In 1999, H&H moved its operations to Gloucester, VA to accommodate the requirement for increased production facilities. In 2002, H&H moved their facilities in Ordinary (Gloucester), VA. In 2000, in response to the need for a combat abdominal dressing to replace the current abdominal dressing of WWII design, H&H engineered and manufactured BIG CHINCH Abdominal Dressing, which was deployed in the combat zones. During 2002 to 2007, H&H has either produced or provided product support to the U.S. Marine Corps for the USMC INDIVIDUAL FIRST AID KIT. During this time, H&H has manufactured over 40,000 of these kits as well as supplied product for the 220,000 IFAK’s. In 2003, H&H engineers continued to develop state of the art emergency first aid products. The first these was the H Bandage, which replaces the CINCH TIGHT, and a dressing that will attend a sucking chest wound, the BOLIN CHEST SEAL. This was the first chest seal in 25 years that will allow the medic/corpsman to seal and protect a chest wound. In March 2016, Dr. Harder decided to retire and separate himself from H&H, and the thriving business was transferred to his sons. Do too many innovations and product lines the company was renamed H&H Medical Corporation and moved to Williamsburg, VA. He is survived by his loving and devoted wife Carol; sons Eric Harder (Beth), Ted Harder (Debbie), Paul Harder (Ann), Beau Harder (Robin), and their mother, Judith Harder. Nicole Hogge (Chris) and Wesley Buchanan, his devoted Sister Susie Mclean, as well as nieces, nephews, many grandchildren and a great-grandchild. Bob will be missed by his many friends, former staff and co-workers; and many thanks and loving blessings to his Hospice caregivers George Coleman, RN and Sam White, CNA and all the support staff from Riverside Walter Reed Hospice Services. A celebration of Life service conducted by Pastor Mike Derflinger will be held 3:00 p.m. Saturday, February 24, 2018, at Bethany United Methodist Church, 1860 Hayes Rd, Gloucester Point, VA. A gathering of friends and family will be at 2 p.m. just before the service. Inurnment will follow immediately after the service in the church cemetery. In Bob’s memory, please consider contributions to the Marine Corps League, Middle Peninsula Detachment #1317, P.O. Box 1930, Gloucester, VA 23061 or the Gloucester County Sheriff’s Department, “Shop with a Cop” 7502 Justice Drive, Gloucester, VA 23061.

Dr. Robert Harry Harder, son of the late James A Harder and Eleanor Lorang, passed away January 29, 2018, after a brief illness from a stroke. Family and friends surrounded him at the time of his death. Dr. Harder was born August 21, 1934,... View Obituary & Service Information

The family of Robert Harry Harder created this Life Tributes page to make it easy to share your memories.

Dr. Robert Harry Harder, son of the late James A Harder and Eleanor...

Send flowers to the Harder family.