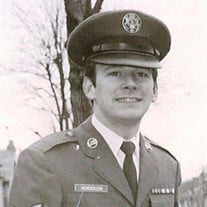 Robert N. Henderson age 70 of Hayes, passed away September 12, 2019 at Riverside Regional Medical Center following a lengthy illness. Robert,or Bob to his friends, was born on January 19, 1949, in Flemingsburg, Kentucky to the late Ernest and Dana Henderson. Bob joined the Air Force at a young age where he worked as a crew chief on the F-15 and A-10. Proudly serving his country for twenty years, he was stationed in England, Germany, Arizona finally settling his roots in Virginia. While in the Airforce he continued his lifelong passion of playing the drums with several bands over the years. Bob truly lived his life to the fullest through fast cars, his planes, playing his drums, talking with family and friends in addition to his canine family. His brother, Ernest preceded him in death. Bob will live on through his children, Nikki Cox (Dale), Scott Henderson, Justin Henderson, their mother, Linda West, grandchildren Anna, Trey, Bobby, Nevah, Alexis, Kelsie, and Owen, brother, Kenneth Henderson, stepmother Nancy Storey and canine Gunner. The family will receive friends Tuesday, September 16, 2019 from 6:00 until 7:30 pm at Hogg Funeral Home Gloucester Point. A funeral service will be held 2:00 p.m. Wednesday in the Chapel of Hogg Funeral home. Interment with military honors will follow in Rosewell Memorial Garden Cemetery. In memory of our loved one memorial contributions may be made to DAV, Chapter No 58, PO Box 58, White, Marsh, VA 23183 or Gloucester Mathews Humane Society, 6620 Jackson Lane, Gloucester, VA 23061. Please visit www.hoggfh.com to share memories and condolences.

Robert N. Henderson age 70 of Hayes, passed away September 12, 2019 at Riverside Regional Medical Center following a lengthy illness. Robert,or Bob to his friends, was born on January 19, 1949, in Flemingsburg, Kentucky to the late Ernest and... View Obituary & Service Information

The family of Robert N. Henderson created this Life Tributes page to make it easy to share your memories.

Send flowers to the Henderson family.