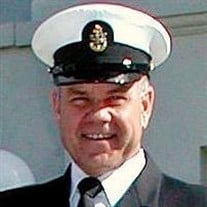 Saluda, VA: Ronald (Ron) Peter Skurkis, 68, lived a full and good life. Born in Wilkes-Barre, Pennsylvania on January 25, 1950, Ron passed away on Tuesday, August 28, 2018 peacefully at home surrounded by the love of his life and wife of nearly 50 years, Patricia Ann Skurkis. Ron is survived by their four adult children Laurie Ann (Richardson), the “twins” Amy (Hill) and husband Randy, Eileen (Davis) and husband Troy, and son Michael Skurkis; and Ron’s sisters Dorothy and Roberta. Together, Patricia and Ron share 7 active and healthy grandchildren, David Richardson, Lauren Hill, Andy Richardson, Matthew Hill, Carter Hill, Olivia Davis, and Hannah Davis Growing up in Pennsylvania Ron decided to serve his country and would proudly enlist for 37 years. Enlisted in 1968 with the Navy reserves, Ron would move to active duty from 1980 through 2005. With a wife and four children, a move from Pennsylvania opened up new opportunities and adventures for a growing family. Together, Ronald and Patricia decided to leave everything they had known to write a new chapter in their lives. As a decorated 1ST Class Chief Petty Officer Navy Deep Sea Diver, he would “dive the world over.” Always the eldest member in his class, Ron prided himself of being the most physically fit and led by example. He skillfully and efficiently passed whatever tests the Navy demanded; including BUDS training in San Diego, CA. Years later, stationed at UCT-1 Little Creek Amphibious Base in Virginia Beach Ron created several lasting relationships and would always refer to his SeeBee buddies throughout his career and after. Ron would see the world by diving most continents and countries like; Africa, Bermuda, Cuba, Dominica, Newfoundland, and many others. He was privileged to dive alongside the son of legendary “father of SCUBA”, Jacques Cousteau. After his military service, Ron continued to serve as a contractor in several international construction projects in challenging areas of the world. By leveraging his construction and safety experience he applied this vast knowledge in countries like Djibouti, Iraq, and Afghanistan supporting our military and allies. Ron also worked in D.C. on a vast reconstruction project to deploy a state of the art air and filtration system in the U.S. Capital building. Being a life-long carpenter, His love of carpentry started as a teenage apprentice journeyman. His love of carpentry would stay with him throughout his lifetime. His last projects included renovating and expanding a 19th century old farmhouse. He also built a horse barn that is with his talents will surely “withstand the test of time” as everything he did was reinforced with “do it right or not at all”. In his later years, Ron enjoyed working along with his son Mike on several construction projects. This experience created several new friendships and an opportunity to share his vast knowledge. Of the many accomplishments and achievements throughout Ron’s life, if you asked him which he was most proud, he would undeniably say his “family.” Everything Ron did was out of his unwavering love and devotion to his wife and family. A Funeral Mass officiated by Reverend James Cowles will be 11 a.m. Tuesday, September 4, 2018, at The Church of St. Therese, 6262 Main Street, Gloucester, VA 23061. Interment with military honors will follow in Rosewell Memorial Garden Cemetery. The family will receive friends from 6 until 7:30 p.m. Monday, September 3, 2018, at Hogg Funeral Home, Gloucester Point. In our loved one’s memory memorial contributions may be made to the American Carcinoid Cancer Foundation, 333 Mamaroneck Avenue, #492, White Plains, NY 10605. Please visit www.hoggfh.com to share condolences and memories.

Saluda, VA: Ronald (Ron) Peter Skurkis, 68, lived a full and good life. Born in Wilkes-Barre, Pennsylvania on January 25, 1950, Ron passed away on Tuesday, August 28, 2018 peacefully at home surrounded by the love of his life and wife of nearly... View Obituary & Service Information

The family of Ronald Peter Skurkis created this Life Tributes page to make it easy to share your memories.

Send flowers to the Skurkis family.